The romantic Kode9 show car first premiered at last year Tokyo Motor Show by Ken Okuyama Design has hit the road recently and it is stopping the traffic and passers by even if it nota s large, powerful and intimidating as a Ferrari or a Lamborghini. This is making famous Japanese designer Ken Okuyama very proud of his latest achievement. After all he is the man who has penned or orchestrated the design of spectacular supercars such as the Ferrari Enzo and 612 Scaglietti, and the Maserati Quattroporte and Birthcage 75th, to mention just the most renowned. 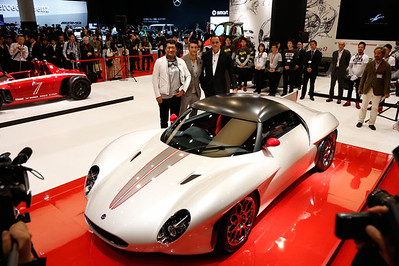 Unlike those big shots, Ken Okuyama’s cars do not aim to the large and rich territories and niches of the famous brands but, quite rightly he creates sports cars for a limited and highly discriminating club of enthusiasts, men and women who put priority on driving pleasure, car design and discreet sophistication.
In doing this Ken seems to master the cocktail of a romantic vision of the purest sports cars, the vision of a simple and yet innovative design approach assembled according the best materials and manufacturing processes available today for “tailor made” sport-cars. 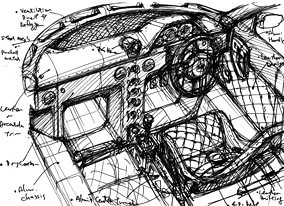 The stiff aluminium chassis-type frame with carbon-fibre  body panels mate the best of two worlds to deliver an open two-seater, rear mid-engined sport car ready to convert into a hard-top coupé.
Its overall dimensions witness that the Kode9 is designed around the driver and his companion, with more than a romantic touch and ironic flavour but great competence, its architecture of an unconventional coupé, its own – style and its overall weight, of just 890 kg.
The under 2.78 kg per HP weight-to-power ratio, achieved with a 2.0 litre supercharged engine credited of 320 HP  (238 kW) at 8000 rpm and the manual 6-speed transmission.

The Kode9 delivers the acceleration and top performance of a supercar; positively superior to those of the contemporary and much acclaimed Alfa Romeo 4C that is credited of 240 HP and a power to weight ratio close to 4. Compare the Kode9 with the 520 HP, 1595 kg Porsche 911 Turbo, the 570 HP, 1380 kg Ferrari F458 Italia and you can easily see that Ken is a designer who banks on top engineering for pleasure of ownership and driving fun.
Sure the Kode9 comes with a much simpler and “race-inspired” cockpit with the strong flavour of old-timers. Essential and minimalist but in its way very luxurious with leather upholstery and the exclusive Tag Heuer Carrera Chronograph watch at the centre of the facia. 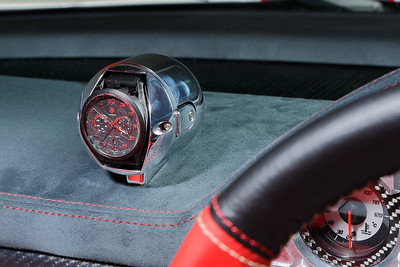 On their turn the tyres make it clear: this is not just a car to show but a fast car that can set impressive lap times on the track:  205/45 ZR 1 at the front and 245/35/ZR18 at the rear says it all.
However the top feature that makes the Kode9 stand apart from anything the market can offer is its style and it could not been different. KODE is indeed the first car manufacturer created and managed by a top car designer that is combining his multi-decade experience at top companies such as General Motors and Porsche with the unique practice at the famous Pininfarina. 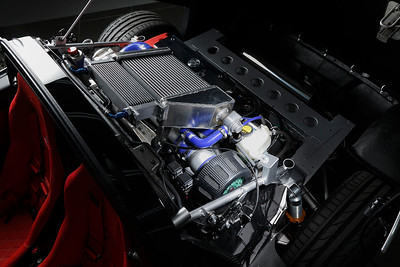 Indeed Ken Okuyama-san likes to call its operation a “Japanese Carrozzeria”.
Shall I now try to compete with the force of drawings and pictures in an effort to describe the design of the Kode9?  I would certainly be a looser. Let me just note how different key elements are combined in a charming combination of soft and round surface and yet some sharp line marking the four “wheel covers” (rather than integrated fenders in bodywork formal languages), the front air intake worked as a reminder of the early Japanese F1, the aspheric roof speaks of a protective shell and of aerodynamics and the tail fin takes us back to our «teen» years and the American dream of the first man on the moon. 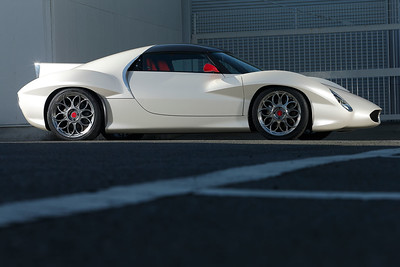