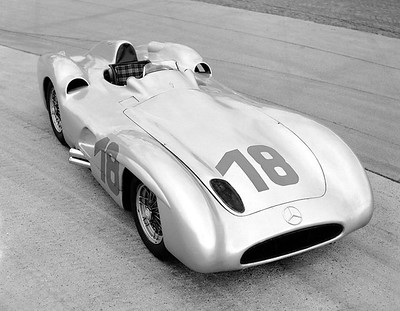 At the 2013 Festival of Speed Bonhams auctioned off an original Mercedes-Benz W 196 R Grand Prix racing car for a record sum, the equivalent of US$ 31.6 million. 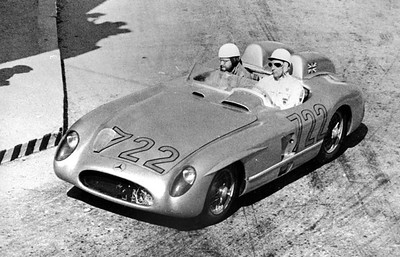 The Mercedes-Benz 300 SLR racing sports car (W 196 S) was basically a type W 196 R Formula 1 racing car with a two-seater sports car body. The main technical difference is to be found in the three-litre, eight cylinder in-line engine running on premium petrol rather than methanol-based racing fuel used for Gran Prix racing.
Its output, 222 kW (302 hp), and its durability and reliability made the 300 SLR far superior to its competitors of 1955, and the car was a clear winner at the Mille Miglia, the Eifel race, the Swedish Grand Prix, and the Targa Florio (Sicily). At the 1955 Mille Miglia, Stirling Moss and his co-driver Denis Jenkinson (start number 722) came in first with the average speed, unequalled to this day, of 157.65 km/h. The track record of this sports car remains unique: the W 196 S won every single race the Mercedes-Benz 300 SLR entered and finished.