In 1952, after Alfa Romeo had won the 1950 and 1951 world championships, time had come for the famous Italian brand to switch from the all-winning Tipo 158 and Tipo 159 “monoposto” to the two-seater racing machines with covered wheels.
Time had also come to look for fame and glory in the popular “Sport” car races. The time to challenge and beat Ferrari and Maserati in the Mille Miglia or at the 24 Hours of Le Mans. The Grand Prix, 1.5 litre, supercharged, Alfa 158 and 159 “Alfetta” where fantastic but were quite different from the cars people see on the streets and would buy. Indeed, after the second world-war and, the Mille Miglia and the 24 Hours of Le Mans were much more popular among car enthusiasts than F1 today.

From the ashes of WW II and an engineering flop. 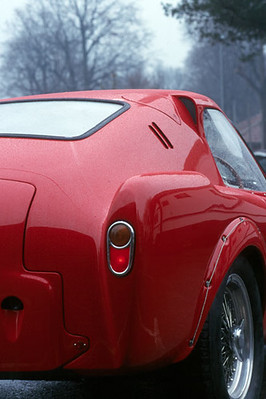 That dramatic changes caused by the Second World War, led to a major reconstruction effort and produced a new wave of sport cars from many carmakers around the world. In the early fifties, Alfa Romeo had several projects and a number of components waiting to be used for new plans on a traditional low production volume left over before the war. Consequently, Alfa Romeo engineers who had been working on different sort of engines, chassis and bodyworks, came to the conclusion that time had come for them to design and build a new racer for the 1952 Mille Miglia.  Their first choice went for a 2.0 litre four cylinder engine (developed from the same unit built for the road going Alfa Romeo 1900 Sprint) and a new, very light chassis. The engine was very powerful and had already reached its limits. By mating it with a lighter than usual car the outcome would be absolute winner.
That engine displaced 1997 cc. and delivered some 158 HP at 6500 rpm. It was assembled on a tubular frame chassis and the famous Carrozzeria Touring built a light two seater, racing type “barchetta” that - for its innovative look - was soon called “Disco Volante” in Italy and “Flying Saucer” abroad.
Few cars were built and tested, through 1952 but only a narrower version of the original roadster, called “fianchi stretti” (narrow sides) was entered in few races in 1953. The bodywork was very light and indeed offered low resistance to air but for its design but it suffered of devastating lift force both at front and from the side. In addition the very light body frame was also very fragile too. In essence: it was a flop.