The story of this unique Alfa Romeo and its many lives.

The first time H.W. Wessells brought the AR 6C 3000 CM back to life was when he bought it from an American garage back in August 1970. The second revival started when Henry took it to Italy where it could be properly rescued by Salvatore Diomante of Autocostruzioni S.D. at Nichelino, in the outskirt of Torino.
It took eight years to restore the car to its original status, a lot of researching, travelling, many meetings, not to mention the truck-load of dollars. All those pain have been forgotten by this time but the supercar of the early fifties is here, as to confirm that it is always worth going after passion and investing into roots of out past.
Today it is intriguing to discover that the car Mr. Wessells acquired in 1970, 34 years ago, the car was “only 13 years old” and had a much different look. That is not because, like a lady, she had got old but simply because late in 1953, once the car had completed its racing career in the hands of Fangio, the car was sent to Coachbuilder Boano, in Turin, for a new bodywork. Today we would call the process “recycling”. 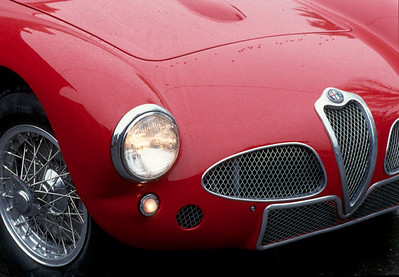 In those years it was common practice to recycle racing cars and use them to build a new car for wealthy and passionate enthusiasts. Inter alia, one of the six cars built by Alfa Romeo was converted by Pininfarina four times. This explains why several bodyworks and styles have been developed on the chassis of the 6c 3000 CM, thus creating great confusion among collectors.
Boano completed his job in 1954 and one year later, in 1955, Alfa Romeo presented the new sport car to General Peron, president of Argentina.