Stile Bertone is now up for sale. In block or parts. It is hoped that soon the company established by the father of Nuccio Bertone 102 years ago return to life and creativity under a professional management.

The sorrow is so great that mane friends, which whom we produced a story for the unpublished e-magazine Kinetika, have asked me to publish that homage written by the excellent Enrico L. Fagone, on the occasion of the centennial of the oldest Italian coachbuilder still in existence.

We like to bring and to show that report as it was made up by the talented painters and graphic designers committed to the Kinetika project through this PDF file. Bertone 100 Years. The Function of Shape.

But for those who wants to see it  on line, here it is. Although in a simpler graphic composition.

"As an object, the car has been the most significant product of the industrial civilization. No means of transport has proven to be as flexible, independent and at the same time as costly for the overall balance sheet of society. As a product, despite the problems of our time, the car is nevertheless completely irreplaceable and indispensable. From a product and design point of view the car represents a particular sphere of application of the most ample design culture. It is often claimed today that cars all resemble one another; this is in part true, especially in the general roundness and in the details which are conceived by the designer, but which are suggested by the laws of aerodynamics and by the need to express actual psychological security. What will the future look like? It is not easy to predict it, since the architecture of the car can be very influential." 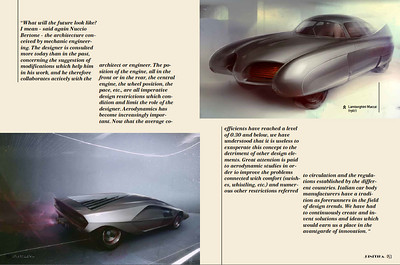 THE FUNCTION OF SHAPE

In 1994 while I was engaged to realize the first car-design monograph issue of Ottagono, the most prestigious industrial design magazine published in Italy since 1967, when I heard Nuccio Bertone, saying those words.

Probably if we see today at the contemporary car design scenario, we can confirm that an increasingly high number of carmakers are now recovering icons and models of the past to offer their patrons’ real "custom-made" limited edition or small series cars.

In the past few years the motor vehicle sector recorded a general homologation to parameters that up to some time ago, allowed distinguishing the various brands considering their reliability, technological development and above all formal identity. The demands of increasingly varied and different customers that were in contrast to such a homologating trend forced sector industries to find new model typologies and to differentiate the various models giving categories that have always been labelled as "niche" once a more precise and strategic role.

Such phenomenon is confirmed by the presence on the market of specific kinds of vehicles (just think above the increasingly widespread coupe-cabriolet models or to the constant increase - as regards both dimensions and functions - of the SUV and cross-over vehicles), and it is even more striking and clearer if we take into consideration cars with high technical and construction con tents and characterised by a strong brand's identity. In addition to the most famous and prestigious designers such as the internationally well-known Italian firms who have recently designed one-off custom-built cars on commission, ......


meeting the client's demands, even numerous car makers are now reviving past icons and models to produce limited-edition vehicles that break the traditional standards of present models to offer real "tailor-made" cars, always according to personalization possibilities. 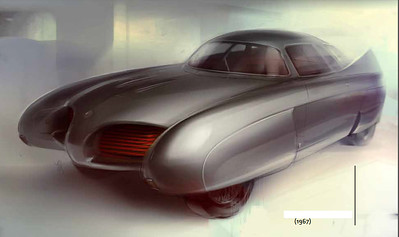 "What will the future look like? I mean - said again Nuccio Bertone- the architecture conceived by mechanic engineering. The designer is consulted more today than in the past, concerning the suggestion of modifications which help him in his work, and he therefore collaborates actively with the architect or engineer. The position of the engine, all in the front or in the rear, the central engine, the wheel position, the pace, etc., are all imperative design restrictions which condition and limit the role of the designer. Aerodynamics has become increasingly important. Now that the average coefficients have reached a level of 0.30 and below, we have understood that it is useless to exasperate this concept to the detriment of other design elements. Great attention is paid to aerodynamic studies in order to improve the problems connected with comfort (swishes, whistling, etc.) and numerous other restrictions referred to circulation and the regulations established by the different countries. Italian car body manufacturers have a tradition as forerunners in the field of design trends. We have had to continuously create and invent solutions and ideas which would earn us a place in the avant-garde of innovation." 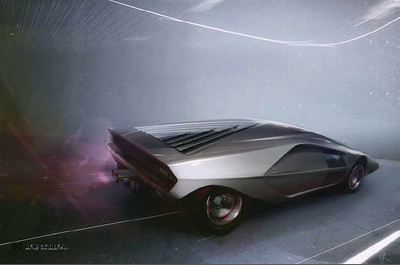 The Bertone coachbuilder's workshop was first established in Turin by Giovanni Bertone in 1912. Specializing first in the construction of carriages and then, from the twenties onward, of automobiles, the company began production on an industrial scale after the war. In 1961 the Grugliasco plant came on line and is still producing Maserati premium cars in moderate annual volume (under 100,000 units per year). A number of special versions of models from the Fiat Group.

The one hundred years of activity of Bertone covers almost the whole history of the birth and evolution of "an Italian line" in automobile manufacturing. A consistent and original line of development, from the research in aerodynamic forms in the BAT (Berlinetta Aerodinamica Tecnica) prototypes of 1953 to numerous designs for sedans and sports cars for Alfa Romeo, Citroen, Lancia, Ferrari, Fiat, Jaguar, and Lamborghini, passing through some of the most important prototypes in the development of the automobile: Marzal, Navajo, Sibilo, Ramarro, Genesis, Nivola, Blitz, Zer, Karisma, Bertone has always ......


considered the transfer of the experience gained in the production of prototypes and concept cars into mass production to be of vital importance. The creative and inventive capacities of the designer have coincided with a determination to explore the world of the car not just on the level of aesthetics but also on a more complex level of function. These basic orientations have permitted Bertone to stimulate the automobile industry on more than one occasion and to gain wide approval for its proposal of a conception of the car that always takes future scenarios into consideration

There are probably two ways that we can summarize the 100 years of Bertone's activity. Firstly the historical continuity of a tenacious and high-yielding industrial program and secondly the company's ability to adapt the design orientations to satisfy the sociai and technological context of the automobile industry, a worid undergoing continual evolution. Across the world Bertone represents not just Italian style but also the epitome of unique entrepreneurial skills-intuitive instinct of the innovative and competitive design: from the first proposals to the most recent realizations belongings to the new Bertone era, the image of the Italian automobile is instantiy and universally recognizable. And this is not just a casual coincidence but also a precise and deliberate "philosophy". "

The designer - said strongly Nuccio Bertone - is a creative par excellence As such, he is not easy to categorize. He is restless. He likes to move outside his proper sphere. He enters the world, chooses his design by intuitive affinity. He is able to imagine, in his work, a product that does not yet exist. He anticipates the trends and tastes of the market which perhaps do not yet emerge officially, but which it is necessary to perceive. He discerns, before others do, what no research institute can ever guarantee. In this regard I remember that I have always wanted to work together with youths of great talent, but with no specific scholastic professionaiism. Usually I do not look for professionalism, I want youths of great intelligence, fantasy and determination. When I find them I encourage them as much as possibie. I like to help them, stimulate them, offer them design "challenges" considered on the limits of feasibility. It may be a coincidence, but my 'workshop', my way to work, has always produced 'number ones'! I will quote at random two 'ex pupils' I am proud of: Giorgetto Giugiaro and Marcello Gandini. 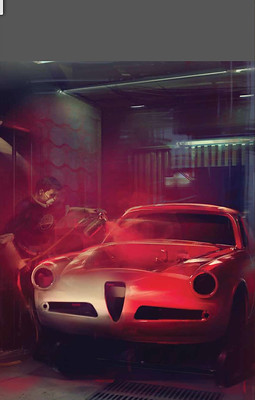 Every human enterprise is characterized by an initial phase of intense creativity. It is the moment when the idea, the design is conceived. This is followed by the machines, the tests, the computers, the robots and so on. A continuous deveiopment of software technologies has taken place in recent years; applied on quite sophisticated computerized workstations such instruments can be of a certain help in visualizing the subject of creativity.


Their complete development will be a positive achievement. But despite this help, Man comes first. Alone with his thought, his spirit and his professionalism. I would like to saying that I consider myseif a fortunate man. I have been able to dedicate my life to a fascinating pursuit. And for many decades I have had the fortune to participate actively in this phase!".