Marcello Gandini and the Lancia Stratos. 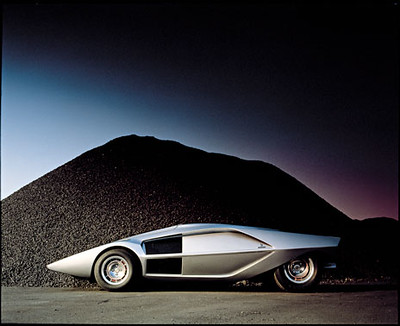 The Lancia Stratos is Gandini’s favourite creation. The designer has a very special liking for the Lancia Stratos, because of its racing successes. But, in his words, also because  "it shows the importance of a good design. If it had not raced, it would still have been a success".
As the man who described the car as "the fruit of an ancient dream that has lasted a thousand years" Gandini has made visions become reality.
The Lancia Stratos is the most convincing example of them all.
Like many of his cars the Stratos shows Gandini's potential for visionary ideas and designs innovations. When it first appeared the Lancia show-car was regarded as being too wild and unrealistic: nothing more than a dream. But from that vision Gandini soon created a multiple world-champion and now hundreds of people around the world preserve his masterpieces as works of art.
At 32 and as director of Bertone's design centre, Marcello Gandini penned the straight wedge shape of the Strato’s HF show-car to demonstrate a concept than would be further developed if the proposal was approved by Lancia. That first design concept want meant to uncompromisingly emphasise the function of the ideal rally-racing machine. 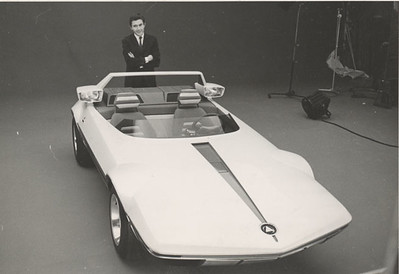 Marcello Gandini with Autobianchi A 112 Runabout

Gandini recalls that "the late Nuccio Bertone said the show car should celebrate the rally success of the Lancia Fulvia HF and to consolidate Bertone's leadership in the design of mid-engined sports-cars."
"It was born in an unusual way, too. At Bertone we built the show car with Lancia Fulvia HF four-cylinders engine and mechanicals
Although in that "preliminary and promotional" phase the show-car had to deliver a stunning style that would dramatically impress the visitors, Gandini had already integrated into it several years of experience with new and trend-setting mid-engine cars, as well as the best of his ideas.
It was not just a styling exercise but a complete project: Gandini actually engineered and designed the whole car, from a clean sheet of paper and according to technical concepts he had become familiar with. 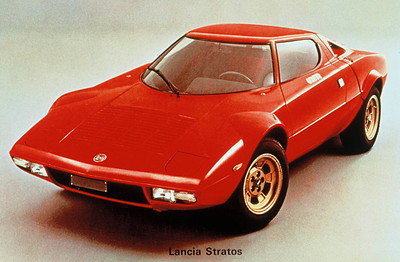 Then old man Fiorio, Cesare's father, in the Lancia PR department, realised the car could be developed a lot further. He got Cesare, to wheedle a Dino V6 engine out of Maranello. But Ferrari didn't deliver anything, not even some drawings - for a long time. So we had to make the car without the engine, and it was shown that way in Turin."
The outcome was so unusual and unexpected that many felt that first Strato’s was an avant-garde and abstract sculpture rather than a motorcar. Instead the Stratos was a real, though revolutionary, automobile and a couple of months after the Turin Show the show-car was driven through Bruxelles to the delight of the public and photographers.
The stroll through the city granted the Strato’s the credibilityit needed to be considered an automobile rather than an UFO. Coming from the  stratos…sphere.
Go to next page for Marcello Gandini Biography.