portrait of a superlative designer, from the memory book of Giancarlo Perini.

«When he dreams, the man is a genius; indomitable and brave as a Genius» (from Akira Kurosawa's Dreams, 1989).

«Gandini is fantastic. Unbeatable when it comes to creating  way-out sports cars with overpowering aggression: some of his coupes seem to bite the ground  even when they are standing still. »

These words were written in 1989 and are not from a critic or a friend but from his toughest rival and competitor:  Giorgetto Giugiaro, the most acclaimed car designer in the world of the past decades.
Although Giugiaro has rarely met Gandini he seems to know him well enough to appreciate Gandini's deep moral strength and stature.
And his way of life.
Like Giugiaro, Marcello Gandini is a self-made man who choose not to get very rich in term of money or a popular and famous man who flies his company's jet to keep up with the unsettling pace of his job. On the contrary he has designed his way of style to suit his own pattern.  He is relaxed, quiet and perfectly fit. He does a minimum amount of travelling, preferably by car. He has too much to do at home and he likes the place where he lives.

Well.....everybody would. His residence and studio are within Villa Gran Vigna that was first built in the 17th century on a sloping green hillside south west of the Musiné mountain (Gandini can see it from his private room) some 20 miles from Turin's city centre. He has spent great effort to fully restore it according to his own design and now it is a beautiful mansion contoured by a large and evergreen wood.
They called him "the secret man", and they are right. The man is extremely gentle and generous but regards talking of him and his works a useless exercise.
He occasionally likes to moderately talk of the present and the near future. Famous motoring writer Steve Cropley wrote that Gandini "would rather think than talk".
Gandini is a man that has a special, discreet charisma and acute intelligence. A man who love to speak  (and think) ironically.
He likes a bit mystery, because that is what stimulate imagination, creativity and «let you dream or see life as you like to».
The way he speaks of himself  (under torture) is a clear example: «I recognize two qualities within myself:  stubborn and unmeasured laziness. For me optimism is a profession, laziness too». 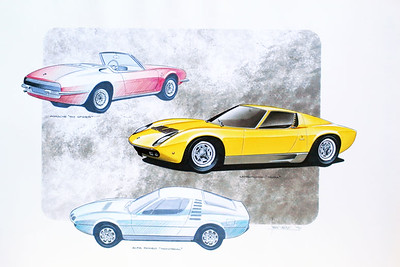 The force of nature and when he was in his twenty consistently practiced parachuting fascinates Gandini. A good car driver, and motorcycle rider, he loves sailing when he can leave for few days and to fly ultra-light-machines. One of his hobbies is to design helicopters.
Marcello Gandini is undoubtedly the world's greatest designer of supercars, having produced more superlative cars for Maserati, Lamborghini and Ferrari than anyone else.
Yet to the car-buying public, there are no Marcello Gandini cars. Names like Pininfarina and Italdesign remain prominent: Gandini's remains unknown. This is a curious state of affairs, since the best judges of Italian design were saying back in the early 1970s that Gandini, then only just in his 30s was the most gifted young car designer of his generation. And the work he has done since then has only added to his reputation-among those who know it. 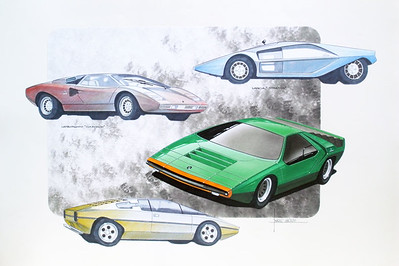 Always an elegant gentleman, he has an air of studiousness, which is reinforced by the fact that he always thinks carefully before he speaks. The rare smiles are wide, generous, and surprising.

Gandini’s silent rise to the top of the world of car design coincided with the take-off of another archistar: Giorgetto Giugiaro late in 1965.

Some time earlier, through a friend for whom he had modified a car, Gandini had managed, to show his creative ideas to Nuccio Bertone, the owner of the famous Torinese design house. On that occasion, Bertone was much impressed and promised to contact Gandini. No call came, and Bertone was never available at his offices or on the phone. Some time later, Gandini met Bertone by chance at the seaside, Bertone was highly embarrassed. He explained that he had indeed been impressed with the work, but also that he had another vital young designer - Giorgetto Giugiaro - working for him. Hiring Gandini would cause him to lose Giugiaro, he said. That was in "about 1963". 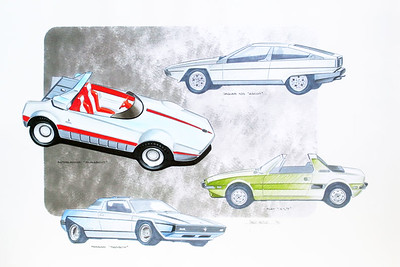 Indeed Giugiaro had made it clear he did not need nor wanted an assistant and that he would resign if someone else was hired.

However, when Giugiaro left, on the eve to the 1965 Turin Motor Show, Gandini was promptly hired to become Bertone's chief designer, at the age of 27.
"It was a very nice feeling of stability," Gandini says, "but I still had one of the lowest salaries in the place. It was raised before too long."

Though often regarded as a designer of exotic cars, Gandini has also produced small, practical models. He sees no great difference between the two disciplines. "Mass production has allowed designers to put into practice many things which would otherwise have remained merely good ideas," he says. 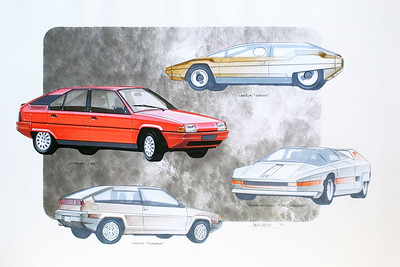 Today, when you ask him about his greatest achievement, he says, "to be able to work as I am doing now".
If you ask, which is the car for which you have most affection?  He considers, smiles and relents. "I have very special liking for the Lancia Stratos, because of its racing successes. But I think it also shows the importance of a good design. If it had not raced, it would still have been a success.

Go to next page for Marcello Gandini and the Lancia Stratos.