New Fiat 124 Spider on the horizon.

Fiat reported to get new 124 Spider from Hiroshima, instead of Alfa Romeo.

The return of the Fiat 124 Spider is not breaking news but in Italy it made the cover page of the second largest and influential Italian newspaper on the opening of the Geneva Motor Show to the public. «Il Corriere della Sera» was the only daily to grant the news, reported by Bianca Caretto, almost one page. In this case the source is relevant: Fiat owns a major stake in the newspaper and the reporter has excellent and long lasting relations with Fiat's executives. The way the news is reported is very significant, a sort of official statement.

Since Sergio Marchionne stated recently that Alfa Romeos would be built «only in Italy», the plan concerning the much-publicized Fiat-Mazda joint-venture for the Alfa Romeo Duetto Heir to be produce for the Italian brand in Mazda's Hiroshima, Japan, plant, was questioned inside and out of the Fiat Chrysler headquarters.
Inside sources suggest that the issue about the marketing of the new Alfa Romeo Spider in late 2015 would be a problem in many markets where the number and size of Alfa Romeo dealers do not grant sales of the volume FGA is committed to collect from Mazda.
Consequently, with the U.S.A. market regarded as the most promising for the new Alfa Romeo spider and the greater presence of Fiat dealers there, Sergio Marchionne and his sales and marketing executives have asked Fiat's designers to restyle the new spider with a Fiat flair.
The move should also appease Fiat's dealers who suffer (non in silence) for limited range of products they can offer to potential customers.
Some sources reported that Abarth would also be an option but, again, Abarth has not the "presence on the markets" required to ensure commercial success to the new FGA spider made in Japan. However, a press officer confirmed to us that the only option for the new convertible sport car is Fiat, although he declined to confirm the decision has been made.
Indeed the reborn Fiat 124 Spider, could also (and eventually) carry the Abarth logo, as it was with the original Sport Spider designed (penned by the American born and educated Tom Tjaarda, father of the De Tomaso Pantera) and built by Pininfarina, from 1966 and through 1985. At launch time the Fiat 124 Sport Spider was powered by a 1438 cc twin-cam, twin-carburettor, four cylinder engine mated to a 5-speed manual transmission, credited of 90 HP but in 1973 the company launched the Fiat 124 Abarth Rally in road going setting. 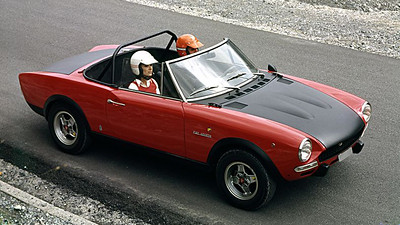 Only 900 units were built and sold of that 1.8 litre, 128 HP, development and racing versions became very popular and successful in rally-racing throughout Europe. Today they are rare and high valued collectors' items.
The news widely reportedly by the Italian newspaper, with no reference at all of the original Alfa Romeo program, confirms that plans for Alfa Romeo are hectically reviewed these days, ahead of the May 6th deadline when Sergio Marchionne, according to his own statement, will be announcing his latest strategic plan for Alfa Romeo and the new Fiat Chrysler Automobiles group.

New Fiat 124 Spider on the horizon.