Peugeot aims at the high-end of the market at the Paris Show, where it will unveil an-all new concept next to the “restyled” Exalt concept first unveiled in Beijing last April. Paris will see the 500 HP Peugeot Quartz Concept, a Plug-in Hybrid Crossover, conceived and designed to be bullish for power and style, without neglecting technology. 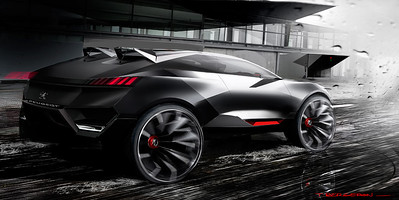 The Peugeot Quartz combines the space, style and comfort of a saloon the Exalt limousine, with the capability and look of a high performance SUV. The rear suspension automatically adjusts ground clearance between 300 and 350mm. In addition an optical system that uses cameras linked to the satellite navigation can read the road and anticipate changes in its surface. One could say the perfect machine for the Russia, its oligarch and their bodyguards. 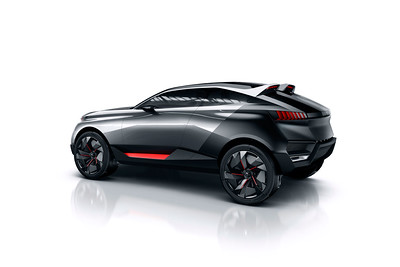 PEUGEOT-QUARTZ-CONCEPT-2014-09
Under the bonnet the French maker has packed a compact but extremely powerful 1.6-litre four cylinders originated from the racing stables and credited of 270 HP (and 330 Nm of torque). The ICE engine is complemented by two additional electric motors of 85 kW at each axle and the deliver traction on all wheels under electronic management. The rotors recharge he 400V battery through deceleration and in theory the Peugeot Quartz is capable of covering the distance of 31 miles in ZEV on a single charge. Designed for the show. 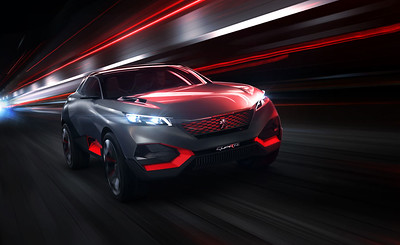 PEUGEOT-QUARTZ-CONCEPT-2014-12
At 4.5m long and 2.06m wide, the Quartz makes quite a size-impression and on the road it shows a truly athletic stance that’s further emphasised by its long bonnet and louvers that help improve airflow to the engine. Sleek lines convey a dynamic feel that’s further accentuated by short over-hangs and the dramatic 23-inch wheels sitting inside generously rounded wheel arches. A glass roof flows towards the rear wings and incorporates two spoilers to further enhance its aerodynamic design. 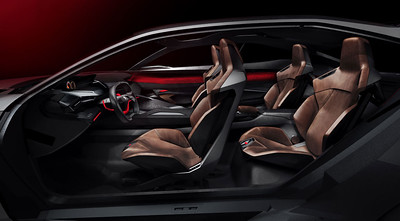 PEUGEOT-QUARTZ-CONCEPT-2014-14
Scissor doors and the lack of a B-pillar complete the classic features of a show-car allowing a great view into the cabin dominated by the 4 individual bucket seats and the driver dedicated i-Cockpit. Here, the compact steering wheel is inspired by the racing world with controls embedded in it and the head-up display provides a large, configurable screen with a central 45-degree polycarbonate strip to show additional information. The instrument panel is on both sides of the small steering wheel and the head-up display is angled towards the driver to ensure easy access to the toggle switches.