CITROEN TO SHOW 2-LITER PER 100 KM CONCEPT IN PARIS.

The Paris Show will provide the stage for what the French industry have achieved within the “New Industry Plan” promoted in 2013 by the French government. The project has been financed with € 250m. and aims to develop technologies leading to the production of car with fuel consumption of just 2 litres/100km by 2020. 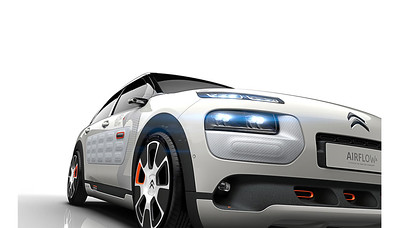 CITROEN--C4-CACTUS-AIRFLOW-2L-CONCEPT-2014-01
The all-new Citroen C4 Cactus was selected by the Peugeot-PSA as the laboratory on wheel to showcases the French group drives towards this aim with the co-operation of the French OEM such as car glass manufacturer Saint-Gobain, seat supplier Faurecia, Michelin (tires) and Continental (brake system). The production car offers an excellent platform to start from. With the latest-generation Euro 6 engines, the C4 Cactus already ranks among the best in its segment with CO2 emissions from 82g/km and fuel consumption starting at just 91.1mpg. 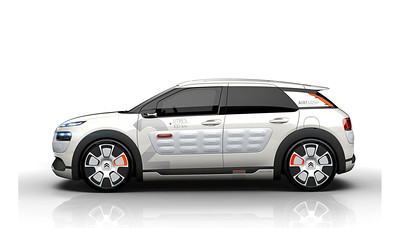 CITROEN--C4-CACTUS-AIRFLOW-2L-CONCEPT-2014-09
The new development has resulted into a realistic family car that promises 2 litre/100 km (over 141 MPG) and takes the name of «C4 Cactus Airflow 2L Concept». The maker says that Concept is 100kg lighter than production Citroën C4 Cactus (through the use of high-performance materials used, including carbon fibre, aluminium, high-yield steels, composite materials & translucent polycarbonate) and its unladed weight is down to 865kg. With respect to the current production car, the air resistance has been further optimised with design innovations banking on variable-geometry components results in 20% improvement in aerodynamics. These include the new front bumper with three air intakes that continuously adjust in accordance with vehicle use, both for engine cooling and to regulate air flow, mobile side deflectors added to effectively guide the air flow around the vehicle and wheels with mobile shutters activated and controlled by centrifugal force. 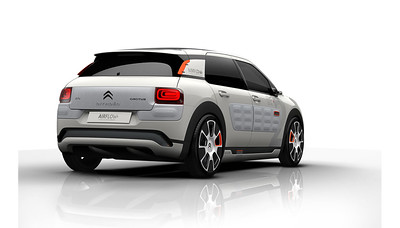 CITROEN--C4-CACTUS-AIRFLOW-2L-CONCEPT-2014-02
In addition the concept is fitted with a new generation of 19-inch “ultra” low rolling resistance “tall & narrow” tyres, the wheel arches feature an “Air Curtain” and The conventional door mirrors have been replaced by smaller, slimmer rear view cameras. Other relevant benefits come from the vehicle sub-structure, which has been entirely streamlined so the air flows smoothly underneath the car. The multi-material sub-structure, has required assembly techniques never used before in the automotive industry. Composite structural parts will be essential to make cars lighter in the future and, says Citroen, the large-scale production of these parts is one of the high-tech, industrial challenges to be addressed by the automotive sector. 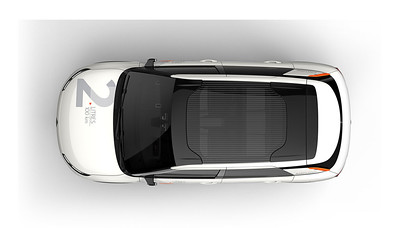 CITROEN--C4-CACTUS-AIRFLOW-2L-CONCEPT-2014-17
On another front LED light modules at the front and rear replace the existing lights. Consuming little power, these new modules save energy and benefit fuel economy. At the show Citroen will use different colours to identify the components and the materials, which makes the difference from the production C4 Cactus. Orange identifies all the aerodynamic features and underlines the high-tech character of the C4 Cactus AIRFLOW 2L concept. Lighter and more aerodynamics cars have been a long time coming but to reach record fuel economy any car must have a hybrid powertrain and so does this unique C4 Cactus. Not the sort of hybrids you would expect though. 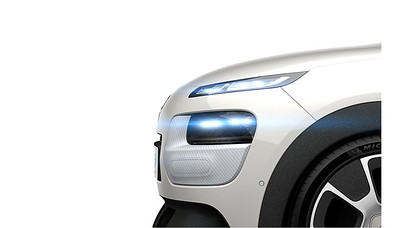