RENAULT AFTER VOLKSWAGEN IN THE B SEGMENT.

Renault has announced that, in addition to their top of their top star, the new Espace MPV, and more starlets, they will unveil a high-tech vision of their one-litter per 100 km (282 mpg) car. The formula was “invented” by Volkswagen but Renault want to be the first to achieve that in with a B-segment compact family car that delivers 100 km on one litre of fuel and yet take four people and some luggage.

Reportedly Volkswagen is also working to this aim and I would not be surprised if the German maker also shows a similar concept in Paris. 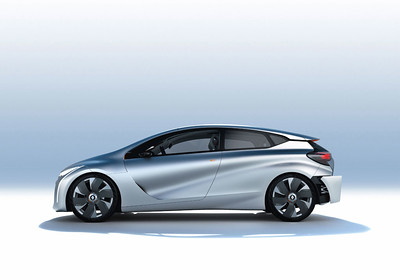 RENAULT-EOLAB-CONCEPT-2014-17
In theory the Renault Eolab show-car is a first public answer to the question how could a Clio of the next generation with «Z.E. Hybrid» powertrain technology, dramatically cuts the current emission of 99 grams of gas per km to a mere 22 grams (on the official NEDC cycle). Designers and engineers know all the secrets and tricks and this is what their EOLAB will show. 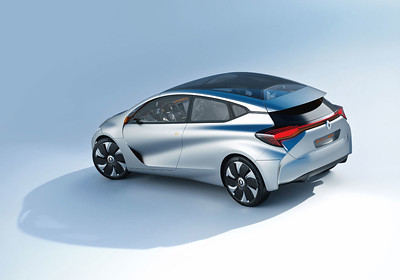 RENAULT-EOLAB-CONCEPT-2014-19
The key elements of the equation are well known: minimum weight, minimum air-resistance, and greatest fuel efficiency of the entire powertrain, whatever this is. The equation call for new challenge when one needs to provide adequate overall surface and interior volume for four to five passengers travelling with good comfort in a cocooning cabin and granting the result swath existing technology and at costs that make economic sense when designing the bodywork and developing powertrain, suspensions, brake et all. 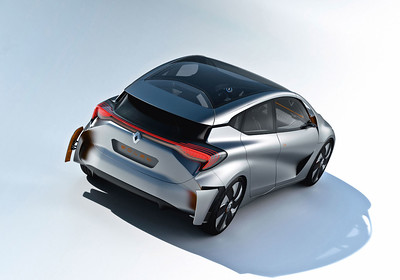 RENAULT-EOLAB-CONCEPT-2014-21
Indeed, according to Laurent Taupin (EOLAB Project Leader) Eolab does it: “The savings achieved by taking a fresh look at the size of the different mechanical assemblies enabled us to cover the cost of using more expensive materials and technologies elsewhere without losing sight of the aim not to add to the overall cost. Well, according to Renault, they have written the Theory Book with their EOLAB and stated that their «Concept previews a feasible B-segment car for within the next decade», It includes some 100 innovations that can be implemented in large scale production this decade. 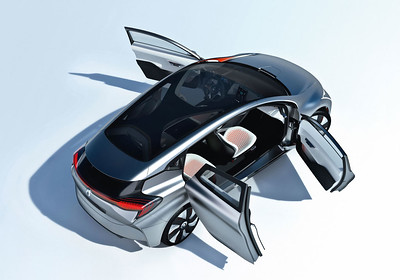 RENAULT-EOLAB-CONCEPT-2014-22
With active aerodynamics (The bodywork has been designed to slice through air efficiently, while movable devices such as an active spoiler and lateral vanes working as ailerons) the show-car achieves a 0.235 Cd, which combined with a main section of 2 m² (sq.m.) Delivers a 30% improvement in air resistance in comparison with the recently launched Renault Clio IV. Renault states that this improvement returns a saving of 1.2 litres every 100 kms at the constant speed of 130 kph (the speed limit on mist European motorways). 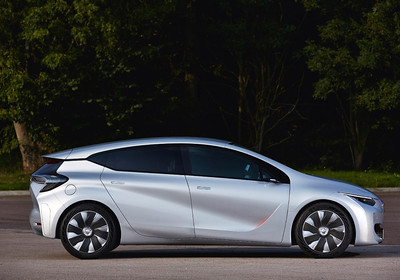 RENAULT-EOLAB-CONCEPT-2014-11
Weight is the key factor in the stop and go operation and here Renault speaks of another 30% (some 400 kgs) reduction of the overall weight of the car before the PHEV 145 kg package. The Renault EOLAB tips the scales at 955kg and takes off 20% of the weight of a comparable Clio. The body structure is 130 kg lighter, skin and equipment are 90 kg lighter. Hence the benefit of lighter shock absorber and suspensions (70) and engine ancillaries (30). The simpler transmission cut overall weight by 60 kg and, last but not least, the electric pack is now 20 kg lighter. 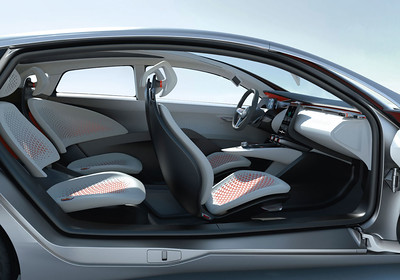 RENAULT-EOLAB-CONCEPT-2014-28
On the counterpart, the ZE hybrid technology, and the lithium-ion battery it requires, do account for 145 kg. However it is the electric drive that in heavy traffic and cities grants the dramatic benefits of running on pure electric (up to 60 km on a charge). Indeed the electric motor, integrated into the clutch casing of the innovative three-speed gearshift granting the transmission of some 57 kW power from the 0.9 litre three-cylinder engine, performs acceleration from standing to 60 kph in first gear and up to 120 kph in second gear. 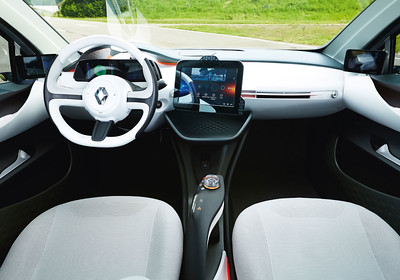 RENAULT-EOLAB-CONCEPT-2014-06
This, with the battery pack recharged under deceleration, allows for a day in the city on a battery charge. The battery stores the equivalent of 6.7kWh. The software associated with the powertrain can switch the powertrain operating mode form “city” to “week-end” mode. That is from stop and go to open road and medium-haul. For a 240 km journey from Paris to Tours, the car will take off on electric only but the ICE engine will start and will keep running at low, constant, speed unless more power from the three-cylinder engine is required.