RENAULT CHOOSES THE MOSKOW SHOW TO UNVEIL ITS STUNNING SPORT R.S. 01 - A PROJECT IN THE MAKING.

The original design has come from the pencil of  Akio Shimizu, a young Japanese designer working at the Guyancourt exterior design studio and from Japan, via Nissan, also comes the 3.8L V6 twin-turbo engine developed by Nismo for the Nissan GT-R.
On the other hand the carbon fibre tub and the aerodynamics engineering comes from the Italian Dallara specialists.
The technical specifications of the racing car reflect the best of Renault Sport expertise. With a carbon monocoque chassis for a weight of less than 1,100 kg and an engine developing over 500 hp, it is able to reach a top speed of over 300 kph. 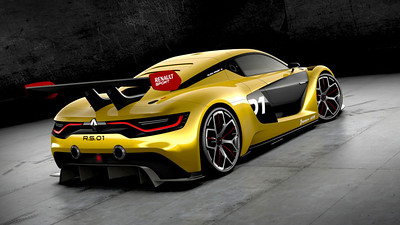 From 2015, Renault Sport R.S. 01 will be one of the stars of World Series by Renault in a new championship, the Renault Sport Trophy, a springboard for the professional GT and Endurance championships.
"Renault Sport R.S. 01 is a racing car of extraordinary design, symbolizing Renault's passion for motor sports. The spectacular design lines reflect in themselves the ambitions of this exceptional car, thanks to the efforts and enthusiasm of Laurens van den Acker and his team. Under the bodywork, it is packed with cutting-edge systems from Renault Sport Technologies. The aim is to achieve an advanced level of performance, delivering thrills for both the driver and the public It is a marriage between the beauty of Renault DeZir and the performance of Formula Renault 3.5!”  according to  Patrice Ratti, CEO of Renault Sport Technologies.