The new BMW Vision Future Luxury looks as elegant and luxurious as one may expects it to be in the near future. And, yes, it is a brilliant, much more sophisticated (for technology) development of the 2013 BMW Gran Lusso Coupé jointly designed and developed by BMW and Pininfarina.
Yet, its most fascinating features are in the innovative lightweight engineering approach to the bodywork and its consequent developments. The approach is based on the extensive use of carbon fibre and complementary materials, to dramatically cut the weight of traditional seats by integrating them in the bearing structure thus making them a structural part rather than something the traditional structure has to carry.
The idea is not new but it has never been applied to volume production.  The innovation is more a matter of production technology with consequent design and engineering concepts banking on the potential of the new approach.

Designers and creative engineers have joined their efforts to articulate in grand style their ideas and construction skill delivering a fascinating prototype, called Vision Luxury Concept.
BMW call their ultimate project for an ultra-luxury flagship «a Vision» and declined to concede that the company will actually be offering such a synthesis of style and luxury on wheels to their clientele in the next few years. 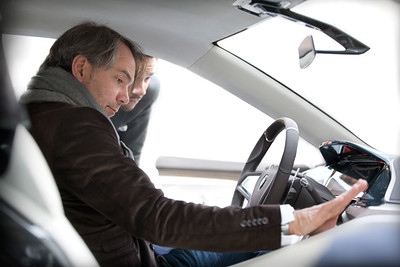 “Innovative technology and modern luxury have always been an important part of BMW’s brand DNA,” says Adrian van Hooydonk, Senior Vice President BMW Group Design. “We use visionary concept vehicles like the BMW Vision Future Luxury to show where we may be going with technology and luxury in the future.»

They do not deny it either and, being the show car a realistic Vision more than a visionary one, and you can safely bet that they will indeed turn the Future Luxury into Present Luxury by 2018....more


From Vision to View.

At the Beijing show, BMW’s member of the board Ian Robertson, told Bloomberg: «There are a number of elements in the car and we will gauge what people say and then we will take a view».

The company's statements are rather cryptic but some structural key concepts, that can greatly reduce weight and increase cabin roominess and comfort, are there to see coming in production soon.  I am looking primarily at the integration of the seats into the bearing structure in a holistic design and the door openings in coach style. These are ideas and solutions suggested by many concepts in the past decades but never implemented so far. The technology was not ready or too costly. 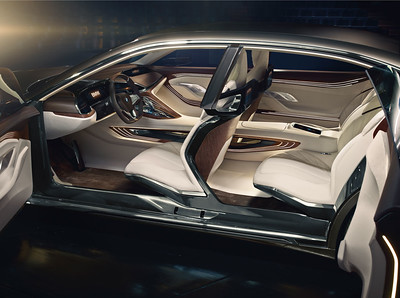 The key innovation when it comes to lighter body construction according to BMW is the multi-layered composite structure. It consists of a sort of sandwich with «many different levels and materials starting with an initial base layer of fine carbon fabric integrated with additional functional levels comprising conductors for interface components and including control and display interfaces as well as lighting functions, which in turn are completed by a further structural, load-bearing layer of aluminium for additional strength.», writes BMW. 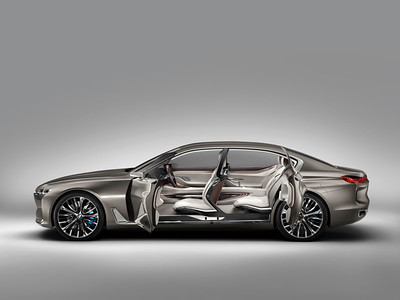 What new composites material can deliver is visible in the doors, under the seats and especially in the innovative, pared-down B-pillar. With the minimalist B-pillar the wide-opening coach doors grant greater comfort and make functional sense......more...


Future Luxury at the time of BMW i8 launch.

Now, BMW’s vision is that this can be done in a production car and at a production costs that luxury cars can justify. Just as we have seen the 2009 BMW Concept Vision Efficient Dynamics evolving from the 2009 concept into the road going product reaching its first buyers later in the next few months, as the 2015 BMW i8, hybrid high performance sports car.
With a difference: this time it may not take six years, but less. 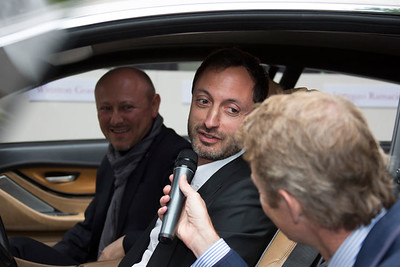 Whereas the BMW i8 is taking the competition by surprise, the new BMW Flagship needs to respond to the Mercedes-Maybach that its competitor has up to his sleeves and the top-luxury Audi might be offering at about the same time.
There is no time to waste: since 2012 two millions candidates have joined the millionaires club of wealthy buyers. Mainly in the booming Asian economies and the United States, according to the World Wealth Report published by Credit Suisse. 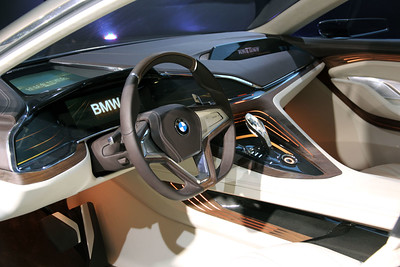 In the driver’s and front passenger’s area, precisely defined lines and surfaces create a sense of exclusive dynamism. The design of the instrument panel closely complements the design of the displays themselves. The driver is surrounded by a wrap-around cluster of three intermeshing displays, creating the typical BMW driver-centric cockpit.


With the core of the lightweight engineering and design concept, the Vision Future Luxury showcases a number of further developments in the areas of Vision Head Up Display, user interface with a very progressive design and ever expanding ConnectedDrive services commanding a Touch Command Tablet for the two rear seat passengers with their own well organised. Plus BMW's Laser light at the front, and organic LED lighting at the rear. 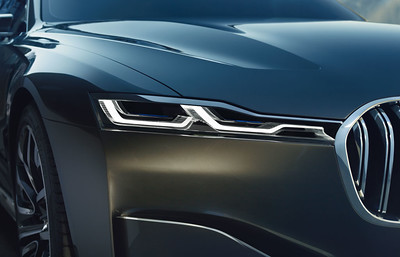 This new technology not only paves the way for a very flat and dynamic interpretation of the typical BMW twin round headlamps, it also sets completely new standards in terms of brightness, range and intensity. 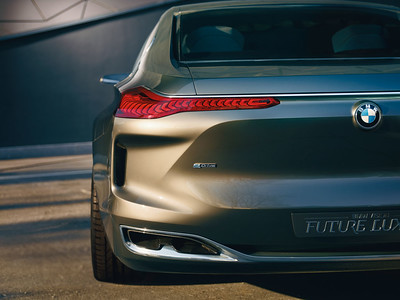 For the first time on a BMW, the rear lighting is provided by organic LEDs, paving the way for a completely new treatment of the typical BMW L-shaped lights.

What will move the BMW's Flagship of the future is something the Bavarian company is willing to talk about at this time but it is obvious that the 5.5 metres challenger of Bentleys and Maybachs will have to offer an unprecedented compromise between the "sense of power" delivered by many cylinders and the social (and legal) commitment to clean and socially acceptable (read hybrid) luxury cars.
Perhaps BMW will tell us in six-months time, at the Paris Motor Show. I expect a series of show-car developments that will progressively take us from Vision to Reality as motor shows go by.