The first Ford Mustang was officially born on April 17th, 1964 according to the carmaker, from a product concept clearly defined by Lee Iacocca.
It was an instance success as the affordable sports car the young generation could afford and soon became the icon of the 1960ies American Dream.
The stunning success steered the marketing and sales "experts" at Ford towards bigger and heavier developments and the designers were asked to play it safer and safer.
The following generations somehow betrayed the original «simple» concept and the myth fades away.
However, the Mustang nameplate has remained strong and is still exciting the desire of car enthusiasts. The new generation launched today with the limited series 50th Anniversary Edition has all it needs to pay homage to the founder of the dynasty.

Separately we will look at the Italdesign 2007 Ford Mustang that represent one of the purest interepretation of the orginal Mustang concept and design, with a very amateurish and spontaneous interview on video.
Here below we recap the 50 history of the Ford Mustang and in our Photo Gallery we offer you a first set of images. The gallery will be further extended in the next few days. 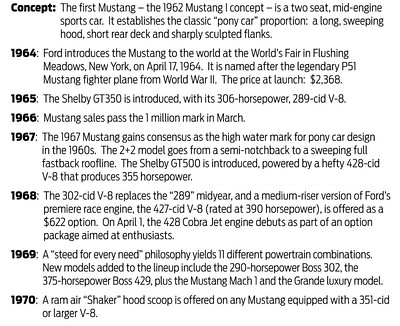