Following the 2012 Onyx Concept of a luxury high performance car, Peugeot will shortly be unveiling, at the Beijing Motor Show, its Exalt Concept of a luxury flagship designed with the Chinese wealthy buyers in mind.
It shows the French understanding and vision of style and luxury combined with high performance, dynamic look, a sporting character and that French touch of practicality.
Indeed the Exalt concept suggest a new kind of five-door, fastback, high tail, architecture in a 4700mm. long (relatively compact to Chinese standards for luxury cars) that features a low silhouette, with the maximum height limited to 1310mm. and sitting on 20 inches wheels.
The bodywork treatment enhance the production technology and materials with the use of bare stainless steel skin and shark-skin textile at the rear.

According to the company this new material improves aerodynamics.

Another distinctive character of the exterior design is a new black light system that enhances visibility under critical conditions such as one finds at dawn or dusk. 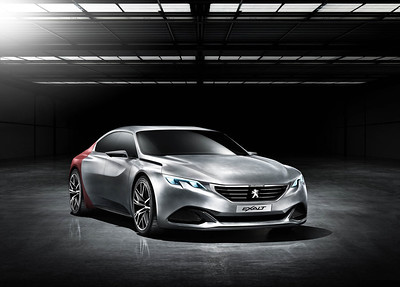 The overall length of the car can be relatively compact and yet grant a large and comfortable cabin because of the minimalist Hybrid powertrain that is made of a very compact 1.6 litres, turbocharged, petrol engine of the RCA R sport cars that delivers as much as 198 kW ( 266 HP) and a 50 kW (67 HP) electric motor driving the rear axle.