Here comes another new offer from the new 4 series stable. It is the BMW X4 that you are requested to call a Sports Achieving Vehicle rather than just another SUV coupe. Indeed you can do better: call it SAC for S A Coupé.

The new BMW X4 combines the hallmark features of the BMW X family with the dynamic elegance of a modern times coupé, resulting in BMW’s first Sports Activity Coupé (SAC) for the premium mid-size segment.

Dynamic by definition, being as it is a BMW, the X4 comes with «a wide range of cutting-edge high-performance engines, the xDrive all-wheel-drive system and a high level of standard equipment.

A choice of three diesel engines, a comprehensive package of BMW EfficientDynamics measures and the extensive connectivity provided by BMW ConnectedDrive are all elements in a driving experience allows sporty performance and incredible efficiency. At 4,671 millimetres in length, it is just 14 millimetres longer than the X3, but at 1,624mm high it is also 36 millimetres lower to the ground and cuts a dynamic profile with its perfectly balanced proportions and distinctive sporting character.

Here is how BMW likes to introduce and describe their latest addition. 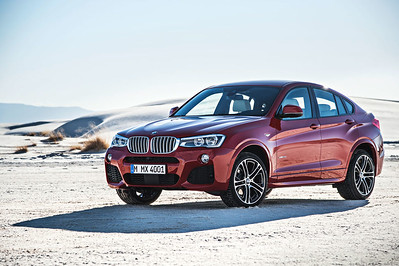 The new BMW X4 follows in the footsteps of the BMW X6, visually combining the character of a Sports Activity Vehicle (SAV) with the sporting elegance of a classic coupé to create an unmistakable presence on the road.

Based on the same platform as the BMW X3, the BMW X4 displays a sporting character of its own.  The large air intakes positioned on the outer edges of the front end and the character lines in the front apron lend the X4 a more muscular and agile appearance. This lowers the car’s visual centre of gravity, signalling its sharper dynamics. 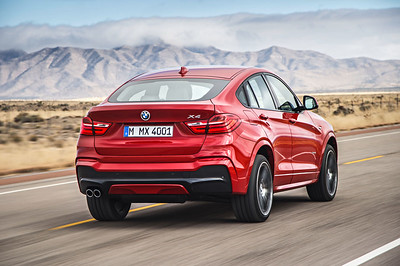 The effect is further enhanced by the fog lamps sited below the signature twin headlights.

The coupé-like roofline reaches its highest point over the front seats, reflecting the traditional driver focus of BMW cars, before dropping gently down towards the trailing edge of the boot lid. The standalone design of the BMW X4 is further reinforced by the fresh interpretation of the signature swage line running along the flanks of BMW models.  For the first time this is split into two the first section rises smoothly from the front wheel arches to the rear door handles, while the second part accentuates the powerful sculpting of the rear wings. 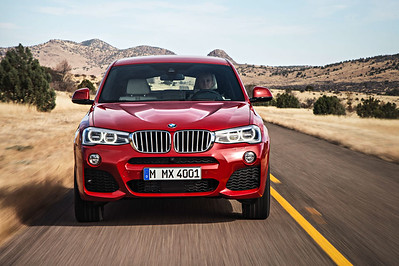 The contoured C-pillars, muscular shoulders and the broad and low-set rear end, hints at the performance of the BMW X4 before the engine has even been started.

The interior of the new BMW X4 reveals a harmonious synthesis of sportiness and exclusivity. The driver-focused cabin uses premium materials including subtle electroplated accents; a high-gloss black-panel look and aluminium trim strips in the wood panelling to create a luxurious ambiance. 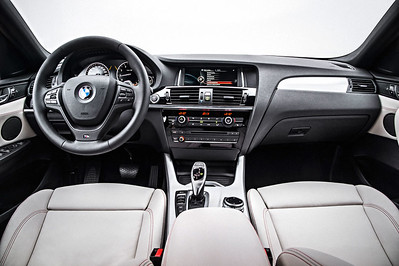 The driver and front passenger sit 20mm lower and the rear passengers 28mm lower than in a BMW X3, accentuating the classic coupé feeling.   It is a sensation reinforced by the rear bench seat, which comes with the type of continuously moulded side support normally only provided by two individual seats, but still offers space for three passengers.

The BMW X4 has a load capacity of between 500 and1, 400 litres that, thanks to the standard 40:20:40 split-folding rear seats, can be used in a wide variety of ways. Everyday usability is further enhanced by the standard-fit automatically opening tailgate. 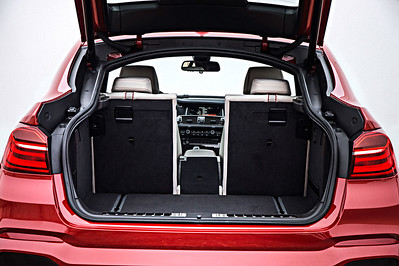 From launch the new BMW X4 will be available with a choice three diesel engines, all of which meet the EU6 standards. BMW TwinPower Turbo technology ensures that performance is maintained while fuel consumption and CO2 emissions are kept to a minimum.

The BMW X4 xDrive20d is powered by a newly developed 2.0-litre diesel engine with an all-aluminium construction. This power unit develops 190hp at 4,000rpm with a peak torque of 400Nm. As a result, the X4 xDrive20d requires just 8.0 seconds to sprint from zero to 62mph. The BMW X4 xDrive20d comes as standard with a six-speed manual gearbox but can be optionally specified with an eight-speed automatic transmission which brings fuel consumption down to 54.3mpg and sets the CO2 emission at 138g/km. 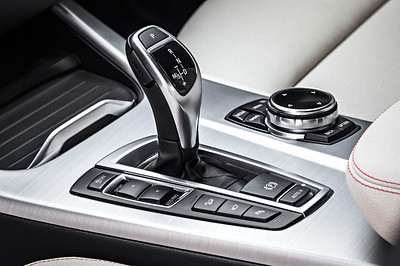 The 3.0-litre six-cylinder in-line engine in the BMW X4 xDrive30d, paired with the standard eight-speed Sport automatic transmission, returns a combined mpg of 47.9 while CO2 emissions are just 156 g/km.  These parsimonious emissions don’t impact the performance with the engine outputting 258hp at 4,000rpm with a peak torque of 560Nm from as low as 1,500rpm, while it accelerates from zero to 62mph in 5.8 seconds. 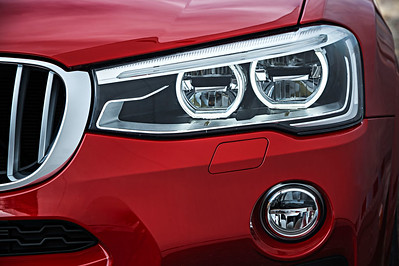 The unparalleled suite of EfficientDynamics technologies also minimises the fuel consumption and emissions of the new BMW X4. Features such as Auto Start- Stop, Brake Energy Regeneration and on-demand operation of ancillary units are standard across the range.  Optionally available are 17-inch aero wheels with reduced-rolling-resistance tyres, which reduce the CO2 emissions of the BMW X4 xDrive20d and xDrive30d by a further 7g/km.

The BMW Driving Assistant offers additional potential for fuel saving. This technology uses route data supplied by the car’s navigation system to identify situations in advance which will require the car to slow down – e.g. on the way into towns and villages, speed limits etc. – and gives suitable recommendations.

The BMW ConnectedDrive features available for the new BMW X4 offer class-leading technology in the link-up of driver, vehicle and the outside world. Providing added safety and greater convenience in the BMW X4 is the optional full-colour Head-up Display, which projects all-important driving information and the assistance system displays into the driver’s field of vision. The latest-generation Professional Multimedia Navigation system, with ECO PRO route guidance, now teams up with the iDrive Touch Controller. Safety and convenience can be further enhanced by option including the anti-dazzle High-beam Assistant, Driving Assistant Plus including Pedestrian and Collision Warning with City Braking function, Active Cruise Control with Stop and Go function and Lane Departure Warning.

The optional BMW ConnectedDrive services allow customers to access smartphone applications such as AUPEO! or Deezer as well as innovative mobility services via the built-in SIM card.  Remote Services and Real Time Traffic Information (RTTI) can likewise be used from the comfort of the car. Online Entertainment provides direct access to music services such as rara or Napster with their millions of music tracks as well as audiobooks. The intelligent e-Call function is triggered automatically or can be used manually to alert the authorities. As soon as the crash sensors report an airbag deployment, the system sends the vehicle location and all key information to the BMW Call Centre via the built-in SIM card, enabling fast and effective assistance at the accident location.