CITROEN RE-INVENTING ITSELF WITH NEW C-CACTUS.

Don’t be mistaken; despite its avant-guardistic design the new Citroen C-Cactus is not just another pretty concept cars built to be part of the show in Frankfurt. That was true with the first Cactus, bowed here six years ago. The 2013 Citroen C-Cactus is called a concept simply because it is not on sale yet and it has much bigger wheels that it has been designed for, some special details and a plush upholstery inside. Otherwise this is the production car, only tuned-up and beautified for the show.

The architecture, the body style, the interior space and design (including the bench-look seats front and rear) and everything “hardware”, are those of the all new Citroen entry in the segment above the newly replaced C3, that will go on sale in the first half of next, shortly after the Spanish production lines in Madrid, Spain, are ready to deliver a fluent supply for the European market.

Following the outstanding success of the premium DS sub-brand upmarket, the company is back to its French roots and to a popular and a very French concept of mobility on four-wheels.

The Cactus has a lot of character and a very charming look that goes very well with its size and stance. Its size fully qualify it for the C4 family: it is 4210 mm long, 1750 wide and 1530 high, with a ground clearance of 210 mm. granting a certain SUV flair and light off-road tractability. The design is very straight and yet trend setting, with the interior leaping in the digital world and the airiness, space and comfort of a “minimalist” lounge.

The instrument cluster is replaced by a 7″ screen with an additional tablet with all controls for car settings, comfort, entertainment, navigation and communication.

The car will also offer a large see-through roof, as with the show-car and innovative “air bumpers” all round.

It is an integrated concept, for the expectations of todays car drivers around the world that is (and will be) inventing Citroen’s “Créative Technologie” (French? English? A provocative bit of both, reflecting the new “global” language”).

Frédéric Banzet, Citroen’s general manager, is positive: the new C-Cactus concept represents the company manifesto for the C-Segment of the market in Europe and beyond.

It speaks of Citroen as a positively French company with a global approach.

Monsieur Banzet stresses that the company has shifted its own paradigm for its C series product line debuting with the new generation based on the PSA Peugeot Citroën group’s new EMP2 platform. The company is committing to attract car buyer with “user-friendly cars that forges an unprecedented harmony between distinctive yet pragmatic design, comfort for all occupants, and easy-to-use technology.

Cars shedding the superfluous and bringing well being firmly into the limelight, just like the Cactus. Creating a large and comfortable all-round automobile with a typical Citroen character and flair that is also simple, fuel efficient, cost effective and very affordable (without being low-cost) new cars is a complex process that we are confident the market will appreciate once again”.

The C-Cactus name is appropriate to the nature of the car designed in the Citroen gardens to live a long and good life in any climate with very little “food”.

Citroen has not detailed yet the technical specifications of the production car but the powerplant range will reflect that of the new C-Picasso, recently launched, and will include small displacement 3 and 4 cylinder engines, petrol, diesel and the eventually the new “Full-hybrid solution – called Hybrid Air – that combines compressed air and hydraulics, under final development at the PSA group. 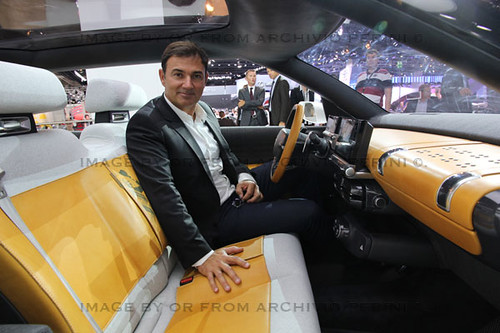 CITROEN RE-INVENTING ITSELF WITH NEW C-CACTUS.