Here, we are not proposing to discuss if car design is a form or art. That subject has been discussed many times, again and again, and no convincing conclusion has been reached so far, with everyone having his own opinion. Just as it is usual when it comes to a definition of beauty, style and arts.
This time my attention has been stimulated by the images of a “safety car for the MotoGP” championship that BMW has sent out recently. The graphic work is so strong and clear that I ended up liking it so much that I wondered why this works of graphic art are confined to motor racing.

Few seconds later, just the time to image a street in New York or Rome, crowded with multi-coloured cars, I swiftly and radically changed my mind.

There already is such a cacophony and orgiastic mixtures of cars of all sort, size, forms, colour and noise on our roads, that we certainly do not need cars with more than one colour or two. 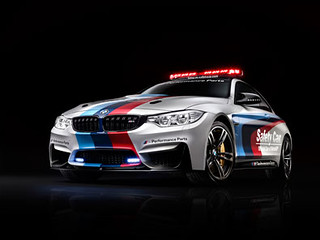 Cars with spectacular paintworks should be confined on racing tracks.

Racing tracks or, in just some istances, at art galleries and museums, as with the unique BMW Collection of Art Cars. 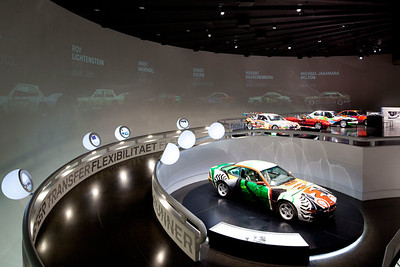 The famous Alexander Calder painted indeed the first "Art Car" in 1975 for the world-famous 24 Hours of Le Mans race, at the request of a French amateur racing driver and famous auctioneer: Hervè Poulain.
Maître Poulain, a top expert for arts and, ..vintage cars critics, was Calder’s friend and, one can safely suppose, he could hardly do with the BMW 3.0 CLS he was going to race at La Mans, painted with the team colours and filled with stickers of all sorts, fonts, colour and dimensions.
If his car had to be colourful, than let it be, but with the touch of an artist. And what an artist!
Hervè idea was promptly understood and shared by the past racing driver and than director of BMW’s Motorsport, Jochen Neerpasch. Neerpasch promptly became the accomplice of Poulain, and sponsored the now famous «BMW 3.0 CLS  by Alexander Calder» project. 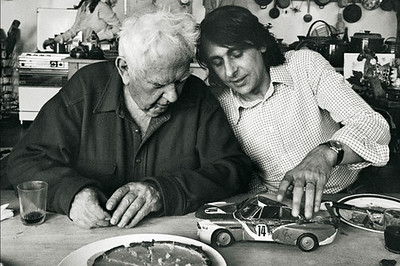 Herve-Poulain-with-Alexander-Calder
The enthusiastic reception of that first Art Car was the spark of inspiration that led BMW to create the Art Car Collection and to state «the Arts Cars are the perfect symbols of the interconnection between art, design and technology».
Today, the two are considered the co-founders of the Art Car series.
Indeed that 1975 work of arts-on-steel-and-wheels was the first in a series of seventeen BMW Art Cars, of which a new book, just published in Germany by art-publishing house Hatje Cantz (ISBN 13192928275978-3-7757-3345-8; € 29,80) tells the story through 200 pages and 148 images. A must have, considering that the 2006 book, «Mes pop cars», written by Hervè Poulain is sold out and is itself is a rarity. 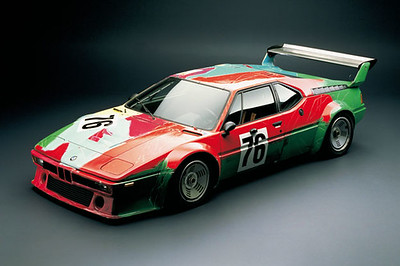 Poulain continued to take part in the Le Mans 24 Hour Race on eleven occasions, driving cars painted by such famous artists as Calder, Frank Stella (1976), Roy Lichstenstein (1977), Andy Warhol (1979) and Ernst Fuchs (1982). Additional ones were commissioned by BMW on special occasions, such as the instalment by Olafur Eliasson, which in 2007 celebrated the set of nine world records performed by the hydrogen powered BMW H2R.
This one is the only work of art that does not show a real BMW being used as 3D canvas by a famous artist, but rather an installation where the skin of the record-setting automobile has been replaced with a complex skin of two reflecting layers of superimposed metal spanning the body of the car. 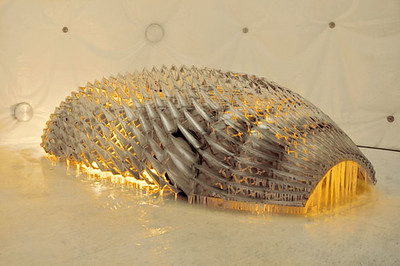 BMW-H2R---Olafur-Eliasson-2007
This shape is covered with fragile layers of «ice». Thus Eliasson transforms «an object of advanced automobile technology and industrial design into a work of art reflecting themes of mobility, temporality, renewable energies and the relationship between car production and global warming in a sophisticated and poetic way.»
Thus came, through the past four decades and at casual intervals, the works of Robert Rauschenberg, 1986; Michael Jagamara Nelson, 1989; Ken Done, 1989; Matazo Kayama, 1990; César Manrique, 1990; A.R. Penck, 1991; Esther Mahlangu, 1991; Sandro Chia, 1992; David Hockney, 1995; Jenny Holzer, 1999; Olafur Eliasson, 2007; and Jeff Koons in 2010.
These “rolling sculptures” offer a wide range of artistic interpretations. 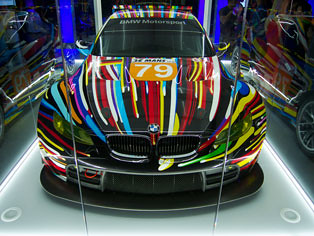 When David Hockney created his Art Car in 1995, he painted the inside of the car on the outside, revealing everything from internal engine parts to a dog in the back. Roy Lichtenstein on the other hand depicted the outer world on his car, from the sun to the tarmac. Robert Rauschenberg incorporated photographic transfers of classical paintings while Andy Warhol and Jeff Koons used the canvas of the car to portray the essence of speed.
With one exception, the works of art are racing and production saloons, coupés and roadsters and are all contemporary witnesses of a mobile lifestyle. The collection covers everything from Pop Art of the 70’s to the “idea of the continents”, right down to new 21st century concepts.
All the Art Cars have always belong to BMW and are part of the company Museum in Munich. "There is always at least one of them at the Museum" said Thomas Girst Head of BMW Cultural Engagement, «while many of them are often "on tour" to famous museums worldwide». Although each of them is worth several millions, nobody has ever attached a price to the collection or its pieces, simply because the company will never even consider parting from any of them.
Photo Gallery