Designing GLASS for Style - Windshield Navigation on the horizon.

A display as big as your windscreen.

Augmented Reality May Become a Reality by 2016 .

There are challenges to this application, namely cost and durability. The inside surface of a windscreen (surface 4) takes abuse, such as parking stickers. This has been the main factoring for not using polycarbonate as the inner layer. Previously HUD worked with aid of a wedged Poly Vinyl Butyral (PVB). Now it looks like that may change.  Head-up displays make driver and vehicle information easily accessible by projecting it onto the windshield just below the driver´s line of sight.

Without taking the eyes off of the road, drivers are informed of important vehicle data, such as speed, engine warnings or navigation data. For its realization a wedge shaped PVB-film is necessary. The wedge shaped film avoids the formation of echo images. Those echo images are dependent on the angle and the thickness of the windshield as well as the angle of incidence of the beam.

Standard wedge angles are defined in order to avoid special developments for every type of windshield. For production of the wedge shaped film small flexible extrusion lines up to a film width of 1200mm are necessary. Colour band film is also available. The loss of thickness during the stretching process of the film has to be compensated in the production process.
The related technology is expected to become available on the market by no later than 2016. 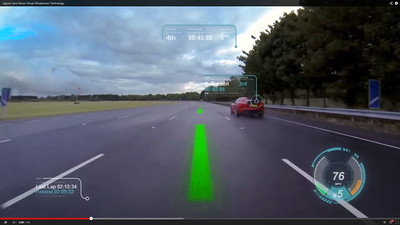 Designing GLASS for Style - Windshield Navigation on the horizon.