Before glass gets into your car, truck, or SUV as a finished product that you look through, roll up or down, cover your engine bay, or the countless other things you can with the finished glass product, it must be ‘floated’ or made from raw materials.

Float glass is a sheet of flat glass made by floating molten glass on a bed of molten metal, typically tin. The manufacturing of glass dates back to around 3500 BC when glass is believed to have been first artificially produced in Egypt and Mesopotamia. Typical line sequence for producing glass Melting furnace Glass melting requires basically two kinds of raw materials: Sand and recycled glass called cullet. These raw materials are mixed together, charged in a furnace where there are melted at around 1500°C to form molten glass.

A continuous ribbon of molten glass is fed out of the melting furnace onto the surface of an enclosed bath of molten tin at 1100°C. The molten glass literally floats on top of the tin, and as it flows along the surface of the tin bath away from the delivery canal it forms a ribbon of uniform thickness. Thickness is controlled by the speed at which solidifying glass ribbon is drawn off from the bath. 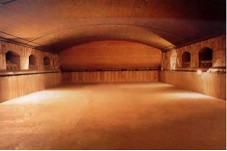 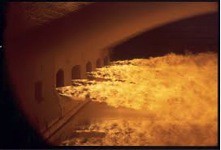 The glass is then lifted from the tin bath onto rollers to the annealing lehr to be cooled down. At this stage the internal stresses are released ensuring perfect flatness. 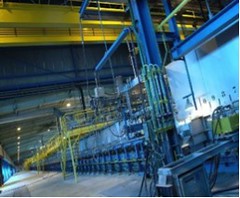 Once cooled down and solidified the glass goes to the cutting area where it is cut in to a large sheet of 'jumbo size' (6×3.21 meters) or 'cut-size' which are specific to customer orders, before being stacked for transportation. The large sheet may be destined for architectural us, while the smaller size to automotive. 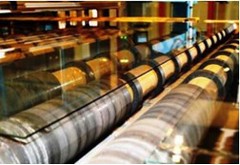 The float process produces glass sheets with a uniform thickness and perfectly smooth surfaces that need no further grinding or polishing. The resulting glass will then be further treated in various ways to incorporate one or several of the advanced technologies applied to flat glass today, depending on the end-product and application for which it is destined. The exact composition of glass may vary but the most commonly used type of glass, soda-lime glass, is made of silica sand, soda ash, limestone, dolomite and glass cullets (recycled glass). Additional materials such as iron oxide or cobalt can be added to the mix to give a green or blue colour to the glass, in the 1980’s Ford added selenium which produced a pinkish colour. The addition of selenium to glass can have one of two opposite effects. First, it will cancel out the green colour that iron compounds usually add to glass. If a colourless glass is desired, a little selenium is added to neutralize the effects of iron. About a third of all selenium produced is used as pigments (colouring agents) for paints, plastics, ceramics, and glazes. Depending on the form of selenium used, the colour ranges from deep red to light orange. The element is also used to make photovoltaic ("solar") cells. The selenium reduces the amount of sunlight that gets through the glass. Glass production is constantly challenged by a multitude of production processes depending on the final product manufactured and its end-applications. Thicknesses may vary from car to car and from car to truck. The float line happens in a series of stages on a float that may be nearly half a kilometre long. Raw materials enter at one end. From the other, plates of glass emerge, cut precisely to specification, at rates as high as 6,000 tonnes a week. In between lie six high integrated stages. However, all these manufacturing processes have a common origin.

Fine-grained ingredients, closely controlled for quality, are mixed to make batch, which flows as a blanket on to molten glass at 1,500°C in the melter.

Float makes glass of near optical quality. Several processes – melting, refining, homogenising – take place simultaneously in the 2,000 tonnes of molten glass in the furnace. They occur in separate zones in a complex glass flow driven by high temperatures. It adds up to a continuous melting process, lasting as long as 50 hours, that delivers glass at 1,100oC, free from inclusions and bubbles, smoothly and continuously to the float bath. The melting process is the key to glass quality; and compositions can be modified to change the properties of the finished product.

The glass from the melter flows gently over a refractory spout on to the mirror-like surface of molten tin, starting at 1,100oC and leaving the float bath as a solid ribbon (glass looks like a continuous ribbon when formed) at 600oC. The principle of float glass is unchanged from the 1950s. But the product has changed dramatically: from a single equilibrium thickness of 6.8mm to a range from sub-millimetre to 25mm. Glass thicknesses may vary from car to car and from car to truck (Thickness is controlled by float line speed). Smaller vehicle generally have thinner windshield than medium or larger vehicles, however there are certain standard thicknesses that glass supplier are set up to run based on volume, and deviation in thickness negates what is saved in weight as the piece price increases. This is truly an amazing process to view, from a ribbon of taffy like glass, frequently marred by inclusions, bubbles and striations to almost optical perfection. Float glass delivers what is known as fire finish, with the lustre of fine china.

Coatings can make profound changes in optical properties can be applied by advanced high temperature technology to the cooling ribbon of glass. On-line chemical vapour deposition (CVD) of coatings is the most significant advance in the float process since it was invented. CVD can be used to lay down a variety of coatings, less than a micron thick, to reflect visible and infrared wavelengths, for instance. Multiple coatings can be deposited in the few seconds available as the glass ribbon flows beneath the coaters. Further development of the CVD process may well replace changes in composition as the principal way of varying the optical properties of float glass.

Annealing is the process of slowly cooling a completed object in an auxiliary part of the glass furnace or in a separate furnace. This is a critical part of glassmaking because if a hot glass object is allowed to cool too quickly, it will be highly strained by the time it reaches room temperature; indeed, it may break as it cools. Highly strained glasses break easily if subjected to mechanical or thermal shock. Despite the seemingly tranquil process in which float glass is formed, considerable stresses are developed in the ribbon as it cools. Too much stress and the glass will break beneath the cutter. To relieve these stresses, the ribbon undergoes heat-treatment in a long furnace known as a lehr. Temperatures are closely controlled both along and across the ribbon. 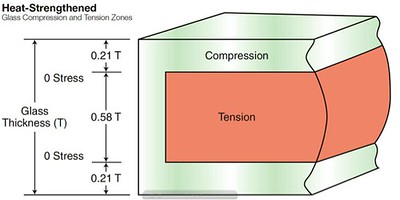 The float process is renowned for making perfectly flat, flaw-free glass. But to ensure the highest quality, inspection (Poke Yoke) takes place at every stage. Occasionally a bubble is not removed during refining, a sand grain refuses to melt, and a tremor in the tin puts ripples into the glass ribbon. Automated on-line inspection does two things. It reveals process faults upstream that can be corrected. And it enables computers downstream to steer cutters round flaws. Flaws imply wastage; while customers constantly press for greater perfection. Inspection technology now allows more than 100 million measurements a second to be made across the ribbon, locating flaws the unaided eye would be unable to see. The data drives ‘intelligent’ cutters, further improving product quality to the customer.

Diamond wheels trim off selvedge - stressed edges - and cut the ribbon to size dictated by computer. Float glass is sold by the square metre. Computers translate customers’ requirements into patterns of cuts designed to minimise wastage.


The Float Plant scope of operation

• Float glass plants are enormous in scope, they generally are:

The world flat glass industry is dominated by four multinational firms, all of which manufacture both float glass and fabricated glass products. These giant companies produce enough flat glass to satisfy a large share of global demand.

The company which made a significant impact on the glass industry with the invention of the float glass process.

One of the Europe's oldest and largest industrial corporations, employing fields a workforce of over 171,000.

They began in 1932 as a small manufacturer. Today it is one of the leading producers of float glass.

Asahi glass is a leading Japanese glass manufacturer. The European branch of AGC Glass is the world's largest producer of flat glass. Based in Brussels, AGC Glass Europe (formerly Glaverbel) was used in the Lancia Stratos by Bertone. Glaverbel was the first western industrial company to invest in the former Czechoslovakia, with phased acquisition of the national flat glass producer (now AGC Flat Glass Czech). It also set up an extensive distribution network in Russia.

Flat glass manufacture, and float glass in particular, is a very capital-intensive activity requiring substantial financial resources, long-term investments and highly technical skills. This is why there are a limited number of large international manufacturers. Smaller producers do exist, although they are not common. In fact, only 9 companies operate float glass production facilities in the European Union or candidate countries. The main manufacturers of flat glass in Europe are the four members of Glass for Europe and its cooperation partner. Together, these companies account for a significant proportion of the European market and run 56 of the 66 float lines of the European Union and candidate countries, notably Turkey.


Float tanks in the European Union and candidate countries in 2009 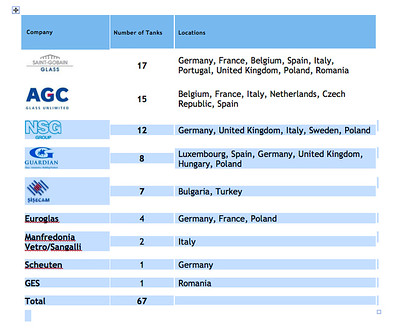 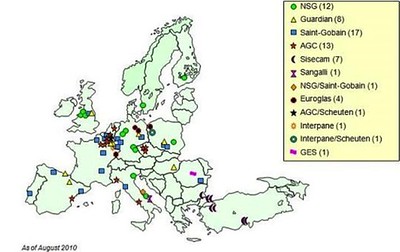 Plants As of August

Float tanks in the Russian Federation in 2009 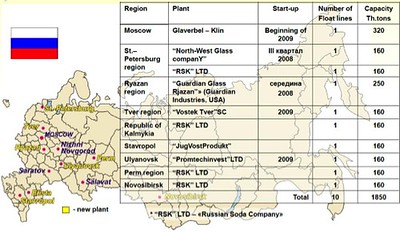 The global market for flat glass in 2009 was approximately 52 million tonnes. This is dominated by Europe, China and North America, which together account for around three-quarters of global demand for flat glass. The significance of China as a market for glass has been increasing rapidly since the early 1990s as the country has become more open to foreign investment and the economy has expanded. In the early 1990s China accounted for about one fifth of world glass demand, but now accounts for 50%.

Of the 52 million tonnes of flat glass produced in 2009, over 29 million tonnes were high quality float glass. 3 million tonnes were satisfied by sheet glass production (a process where molten glass is drawn out of the furnace vertically and subjected to an inferior annealing process); and 2 million tonnes were rolled glass (a process where molten glass is squeezed between rollers to form sheets, usually with a pattern embossed on the surface). The remaining 18 million tonnes were lower quality float, produced mainly in China. Rolled glass demand is expected to grow as new facilities are commissioned for the manufacture of high-transmittance glass for use in solar applications. Automakers have gone into the glass business before, in an attempt to have more direct control of the process, shipping costs, and time in the supply chain. Ford Motor Company was one of the first to do so. Ford even went so far as to not only build a manufacturing and fabricating facility they built a float oven, a process where the raw glass is made. Bertone, which sold to ACG. Chrysler Corporation built a plant to form, edge finish and assembles components in the U.S. in the late 1950s. Plants like these are similar to Bertone’s undertaking. Most of these efforts have not gone well, as automobile manufacturers are now stepping out of their core competency.