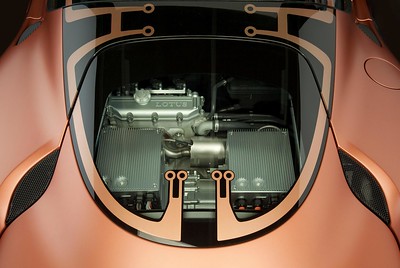 The Lotus 2010 Lotus Evora 414E Hybrid is so-named because of its 414 horsepower output, which is derived from two electric motors driving each of the rear wheels independently via a single speed geartrain that’s integrated into common transmission housing. In this way, the vehicle is able to vector torque to either of its rear wheels for additional stability. Each of the electric motors is rated at 295 pound-feet of torque, which should provide for some exhilarating acceleration action--expect the 0-60 mph sprint to take less than four seconds. It features a wraparound cockpit glass most of us would call the windshield and windows is what really grabs your attention as you move alongside the car.

With the windows being frameless, and with the A-pillar being blacked out, the wrap around effect is maximised with the large piece of glass in front raked so far back in the Evora. Further setting it apart from a standard Evora, the 414E Hybrid Concept is done in satin-finish copper paint and crowned with a unique glazed roof panel/transparent engine bay cover complete with a cool graphic that recreates the look of a printed circuit board. There’s no point in driving such a car and handing out sound samples to fellow motorists and passersby’s without showing them where that beautiful sound is coming from. And that’s dramatized with black wire mesh covering the gaping holes around the glass covering.
More and more companies are integrating much more glass and polycarbonate into a vehicle that was primarily the domain of sheetmetal, such as integrating glass into the decklid.
The common complaints to this design are visibility into the cargo area and addition heat load in the cabin.