As we design the future of transportation we constantly challenge ourselves to do better, use old materials in ways not used before, and use new material to create the previously unattained. Use lighter weight materials to increase fuel economy. We continue to design for style. The automotive glass designer maybe called upon to use non-traditional materials for traditional openings. They may have the opportunity to fill openings other than a windshield or backlite with glass. They also may be asked to have their glass do more than act as a translucent panel. Glass has many uses due to its resistance to extreme thermal changes and good structural integrity. Glass is such a versatile commodity, increasing more useful as we develop apps, touch screens, and interactive surfaces.

In this article, I will look at the technological challenges and opportunities for using glass in areas not normally used in the automotive field, as you may know it. Unique ways glass is, can, and maybe used. I will profile everything from exotic cars to family crossovers to glass covered engine bays to interactive “smart” side windows. 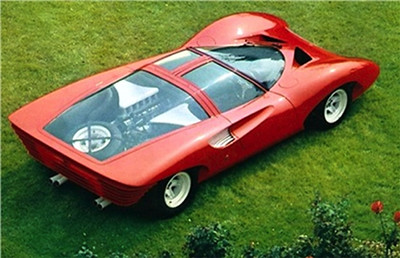 The Pininfarina P4/5 was never meant to strictly be a concept car, but a mind-blowing street machine. James Glickenhaus, a film director and stock exchange magnate who wanted the ultimate Ferrari commissioned Pininfarina to re-body an Enzo. In March 2005 Glickenhaus, an avid car collector, was approached by Pininfarina who asked if he was interested in commissioning a one-off car. Glickenhaus replied that he would like a modern Ferrari P, and in June of that year he signed a contract with Pininfarina to produce the car including the price, approximately US$4 million though in an interview he said "I feel they gave me more than I expected". Glickenhaus purchased the last unsold Enzo Ferrari and upon receipt of the car he took it to Pininfarina to be redesigned similar to his 1967 Ferrari 330 P3/4 chassis 0846 which he also delivered to Pininfarina. The car picks up where the late 1960s P-series Ferraris left off, the last being the 330 P4.
This time the car is all carbon fibre, shrink-wrapping the Enzo's mighty 485 V12, which is visible through the clear black (deep tint glass) ventilated engine cover. Glass would be unique and still provide the structural integrity needed. The glass louvered engine bay is still one the most talked about designs on this automobile. Special attention was paid to its aerodynamic impact and how it impacted the sound the car makes.