The interest shown for glass design and engineering from our readers has led ADCI to ask Lyn Zbinden to share his knowledge and experience with our professional design, design students and tutors.
We thank him for accepting our invitation and here is his first contribution. We plan to publish his short lessons at regular intervals. Please feel free to ask questions and make comments through these pages.

Designing for Style©
by Lyn Zbinden

Some designs make for good style. Some make for good engineering.
Around 1970, a rivalry was brewing between the famous design-houses of Pininfarina and Bertone. The coachbuilders were trying to outdo each other with flamboyant and beautiful automobiles.

In the 1970 Lancia Strato’s concept car, later named Stratos Zero, the windshield extended overhead giving what’s claimed to be a great view of the road in front and the sky above.  As a glass designer and engineer, I like this. One of my six main design rules, ‘Rate of Change’ is slowed by the almost flat windshield. Bertone not only created something that please both engineering and styling, but he «Designed with Style». 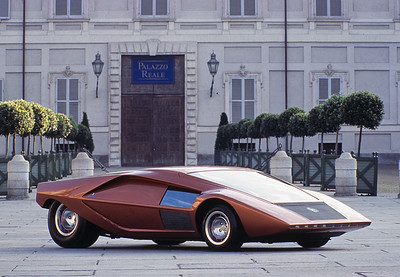 The futuristic instrument panel was offset to the left and displayed info in green acrylic glass. The Zero was just a design concept but it was a fully functioning prototype.
When an automaker commits to design a new vehicle, there are many factors that act upon the proposal that will influence the success of the project. In most mass produced offerings, domestic and foreign, the number one driver is program capitalization. The automaker asks, “What can we afford to spend or What can we afford to invest as a company and who are we trying to reach as a target audience”?
Through a series of contributions, I will cover the entire product portfolio of an automotive manufacturer, from those most affected by production volume, like the mass produced Toyota Corolla or Volkswagen Beetle to the least affected, the luxury sport segment, Maserati or Ferrari. There are sustainable engineering rules that govern good design of glass; however some of these rules can be “bent” depending on the vehicle. I will focus in particular on, glass. This is a component often overlooked, but critical in passing stringent tests, i.e. roof crush and mitigating occupant ejection due to poor assembly practices. It remains one of highest warrantied components in a manufacture’s assembled parts.