When the Ford Mustang first came out 50 years ago it was an immediate success. A tough-looking car, with enough performance to go with the looks. It also was quickly discovered to the movies, i.e. the first Bond-film Goldfinger.

Lee Iacocca is the man who took the Mustang trough from the first sketches to a tough American dream-car.

But most of all it became the dream of almost every young man, both in the USA and Europe. It became the definite leader amongst the car in which you could pick up girls.

Motoring history proves us that it is difficult to keep to a proven concept, and all eager designers and marketing people just have to make a new version of an automotive hit! Which in my opinion opened the gates to all of Fords rivals to rush out cars like Chevrolet Camaro for example.

From the first Mustang of 1964 Ford came out at 10-year intervals with new versions that in my opinion were "ugly step-brothers" of the original first-born. 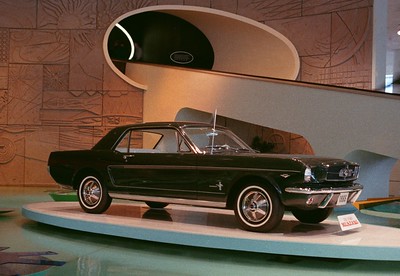 But now someone at Ford has decided to bring out a new version of the original Mustang and for the first time it will also aim at the European market, starting next year!

I must start saving money from my pension, so that I can be one of the first to let the roof down and the wind play with my hair.

But as the quote in the beginning of this inset quite rightly states: "Never change a winning game!" I hope the new Mustang will prove the statement to be right.