Sergio Marchionne might have bet his highest stake in his career by firing, the way he did it, Luca Cordero di Montezemolo, under the pressure of the imminent listing of the new Fiat Chrysler Automobiles N.V. (FCA) a the NYSE on October 13th. On that day the stock market will rate the level of confidence the financial institutions have in his new company and how much (and at which cost) Sergio Marchionne will get the investment-credit he needs to implement the business plan he emphatically announced last may. If he loose he will earn million of critics and enemies that will blame him for ever, in addition to the critics and sceptics about his plan to save Alfa Romeo and make it a 500,000 premium car makers by 2018.

Come October 13th and his total control of Ferrari will be his insurance policy and FCA’s parachute. In case of emergency he will have a very precious jewel to sell either as a whole or through an IPO. If not, Ferrari’s value will continue to increase, as production of supercars will climb from 7 to 10 thousand and more, under his tenure. That Marchionne wanted to be in full control of Ferrari was already clear on May 6th, FCA Investors day. Plans of all brands were presented by their executive officer. Marchionne spoke for Ferrari and what he said is clear. There are plenty of millionaires waiting for a Ferrari and less than 10.000 pieces per year is still exclusive enough. 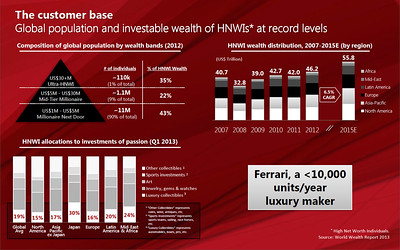 Officially, there is no way that Sergio Marchionne even considers selling a Ferrari minority stake through an IPO or that it «becomes American» 50 years after Giovanni Agnelli took it away from Ford with a coup de theatre at the 11th hour.

But indeed, answering direct questions, Marchionne did not commit. He only said: it is not on the table. I cannot say no, I cannot say yes, it just is not there. Is not in his mind? Not in the mind of the board? These are just few questions left with no answers these days.

As of October 13th (if not earlier) additional millions of eyes will be watching him, ready to shoot at him for anything that will go wrong with Alfas Romeo, Maserati, Fiat and now ….Ferrari.

With the difference that now there will be not just the Italians political and financial institutions, the upper-class establishment, the industrialists, the customers, the workers unions, the man in the street, watching him but also millions and millions of Ferrari fans around the world. People for whom Ferrari is much more than the world’s strongest brand but indeed a religion.

Just consider this: the day after Montezemolo and Marchionne went on stage in Maranello to perform the worst press-conference of their life, in Washington, on the even of another September 11th, President Obama made an unprecedented statement on the U.S.A. initiative versus terrorism. Well, next day Italian newspapers, granted more space on previous pages to the Ferrari showdown that to President’s Obama statement. 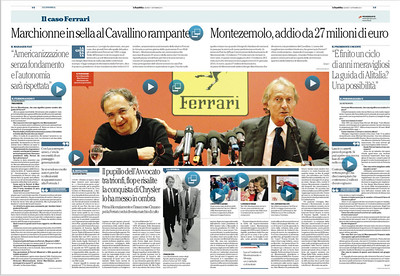 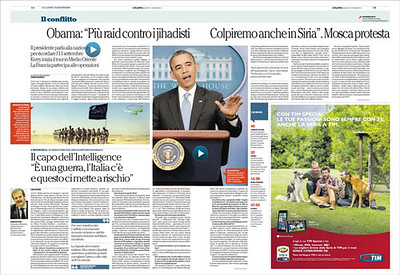 To Italians (and many more in Zurich, London and Paris) an elegant style does matter since the Florence Renaissance and to them the form of manners is substantial.

Marchionne intentionally accelerated the departure of Montezemolo ahead of the intended (and possibly agreed deadline) with a perfectly planned set of moves performed on the week of the Italian F1 Gran Prix. First, all of a sudden, all media reported rumours that Montezemolo could step down at the end of the year.

Than, on September 5th (Friday) Montezemolo denied the rumours and told the press: “Last March I committed to stay for three more years, in case of any changes I will be the first to inform you”.

Adding gasoline to the burning fire, right on the race day, when everyone was watching and listening, Marchionne told the press that the disappointing performance of Ferrari's Formula One racing team was "unacceptable" and that it was "absolutely non-negotiable" and that Ferrari should win Formula One races, added, with direct reference to Montezemolo “None is indispensable”. A rude invitation to get out in Marchionne style that Montezemolo could not let go.An invitation accepted and made official with a diplomatic press release issued on September 10th but resolved only with the subsequent showdown of the most disturbing press-conference ever televised live from the Museo Ferrari, and reported world-wide again and again. 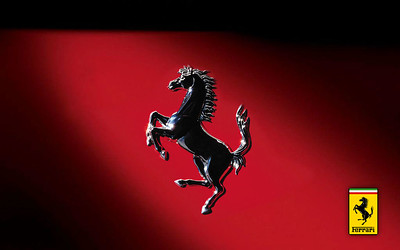 Yes, the event will go down in history.

Although the two men spoke for more than an hour and apparently replied to many questions from journalists, they did not offer many answers and despite the flow of words, it was the body language of the two “fighting cocks” did tell everything.

That was on the eve of the Ferrari’s board meeting called to approve another record breaking half-year balance sheet.

Montezemolo could not agree more with Marchionne that Ferrari must win races if not world titles in F1 and pointed out that in the past Ferrari have been second players for a much longer period of time before his appointment in 1991. F1 recent performance was the only issue Marchionne could quarrel about, considering the record performance of the GT cars business.

Nevertheless, FCA supremo did not like Montezemolo idea of a totally independent Ferrari, of a plan to sell a Ferrari minority with an IPO at the Singapore stack exchange and the strategy to limit production to 7000 Ferrari per year to preserve exclusivity.

Marchionne has already conceded that fewer than 10,000 units will do with the extra benefit of an EBITDA growing to above 1.0bn euros. 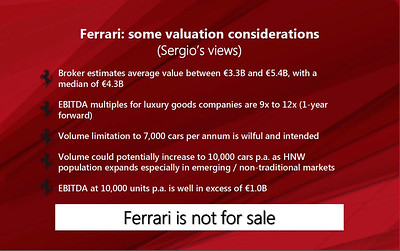 On the other end how long Ferrari will remain independent and Italian is not an issue, according to Marchionne, as long as it is a part of FCA. Montezemolo had radically different opinions on these matters. The real fact is that the two men never went along well ever since Montezemolo was appoint chairman of the Fiat Group and Sergio Marchionne was reporting to him as CEO of Fiat Auto Spa.

Short term not much will change.

At the Scuderia Ferrari there have already been quite dramatic changes through the past months and a new team is in the making. By the time FCA debut at the NYSE, Ferrari will be as it is, sales will continue to flourish and it is unlikely that Ferrari will do much better in F1, unless of a….suspicious miracle (yes, they happen in F1, where business is a serious business). Just image if a Ferrari wins in Singapore this weekend or in Japan two weeks later.

Waters are now calming down at Marchionne and Montezemolo headquarters, wherever they are, and the attention is focusing on the many new steps anticipated and dispensed as powerful means of distraction. 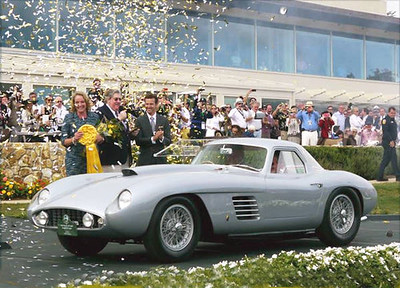 The celebration of Ferraris’ 60th anniversary in U.S.A. at Beverly Hills’ Rodeo Drive on October 12th with the parade of «60 of the most historic and spectacular Ferraris ever assembled» and the «World premiere of a new Ferrari vehicle, a set of limited run of 10 bespoken “Ferrari Blue N.A.R.T” dedicated to the famous North American Racing Team of famous Luigi Chinetti, and delivered on the occasion to their owners.

Plus the special “Spyder” to be unveiled at the Paris Show in two weeks time and, Marchionne stated, the launch of the new Alfa Romeo (Giulia) on June 24, 2015. This is quite a commitment Sergio needed not to make but which he did for good reasons.

The ousting of Montezemolo is costing Ferrari some 27m euro (but half of it will be paid over a very long period of 20 years: Italian mysteries) and his most iconic chairman after Enzo Ferrari.

It is also clear that Sergio Marchionne, the Boss of FCA will never be comparable to Luca Montezemolo “the leader, the Supremo” of the Ferrari we know today, just as he has never been compatible with him.

A mathematic mind will replace a super-ego soul.

The question is not whether Ferrari can prosper further with a part-time chairman.

Marchionne is convinced it can. He bets on Amedeo Felisa, the company’s CEO for the GT business and on the recently appointed (by Marchionne) Marco Mattiacci team principal of the F1 racing team, and their people. The Ferrari people. 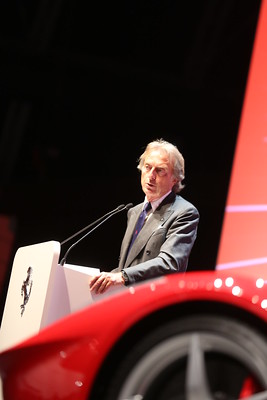 The question is what Ferrari will be in 3, 5, 10 years from now. “I am leaving the company with plenty of projects in the safe box, they will implement the ones they will choose to» said Montezemolo, implying that there were substantial disagreements about the company strategy and image policy.

Under Montezemolo predecessor, Vittorio Ghidella who took the Fiat Auto group to the top of the European auto industry, and made it very profitable with Giugiaros’ designed Fiat Uno, Ferrari developed the semi-monocoque 348, replacing the traditional tubular frame for higher volume production. It was a flop that heavily damaged the Ferrari credibility and cash.

Keeping that in mind, some Ferrari dealers now expect a new rush to buy the most expensive Ferraris of the Montezemolo “era” and store them for auctions in the future.

«This is the end of an era and so I have decided to leave my position as Chairman after almost 23 marvellous and unforgettable years in addition to those spent at Enzo Ferrari’s side in the 1970s.». Adding: «I am leaving the company with plenty of projects in the safe, they will implement the one they will choose” Thus suggesting that are also difference of opinion on what Ferrari should offer to his clientele in the next years

The way BMW and Porsche are moving upscale in their luxury sport cars market with innovative bodywork and hybrid technologies already requires major investments for which Marchionne needs more financing.

The same goes for the F1 programs. Montezemolo indeed conceded that, in comparison with Mercedes-Benz, Ferrari should have invested more into their research facilities.

Ferrari’s chairman Luca Cordero di Montezemolo is not just the impeccable and aristocratic, flawless, white knight born to ride the Prancing Horse. His life and career under the protective wings of the late Giovanni Agnelli was not crystal-clear and he had quite a bit to be forgiven for. However, because of his superb manners and aristocratic behaviour he has been regarded as the perfect Ferrari chairman. His image as a public person is so good that he is already spoken for the role of chairman of the newly formed Alitalia-Etihad airline.

Ethiad and the UAE sheiks have Ferrari sponsors and good partners in recent years and an official announcement is expected soon.